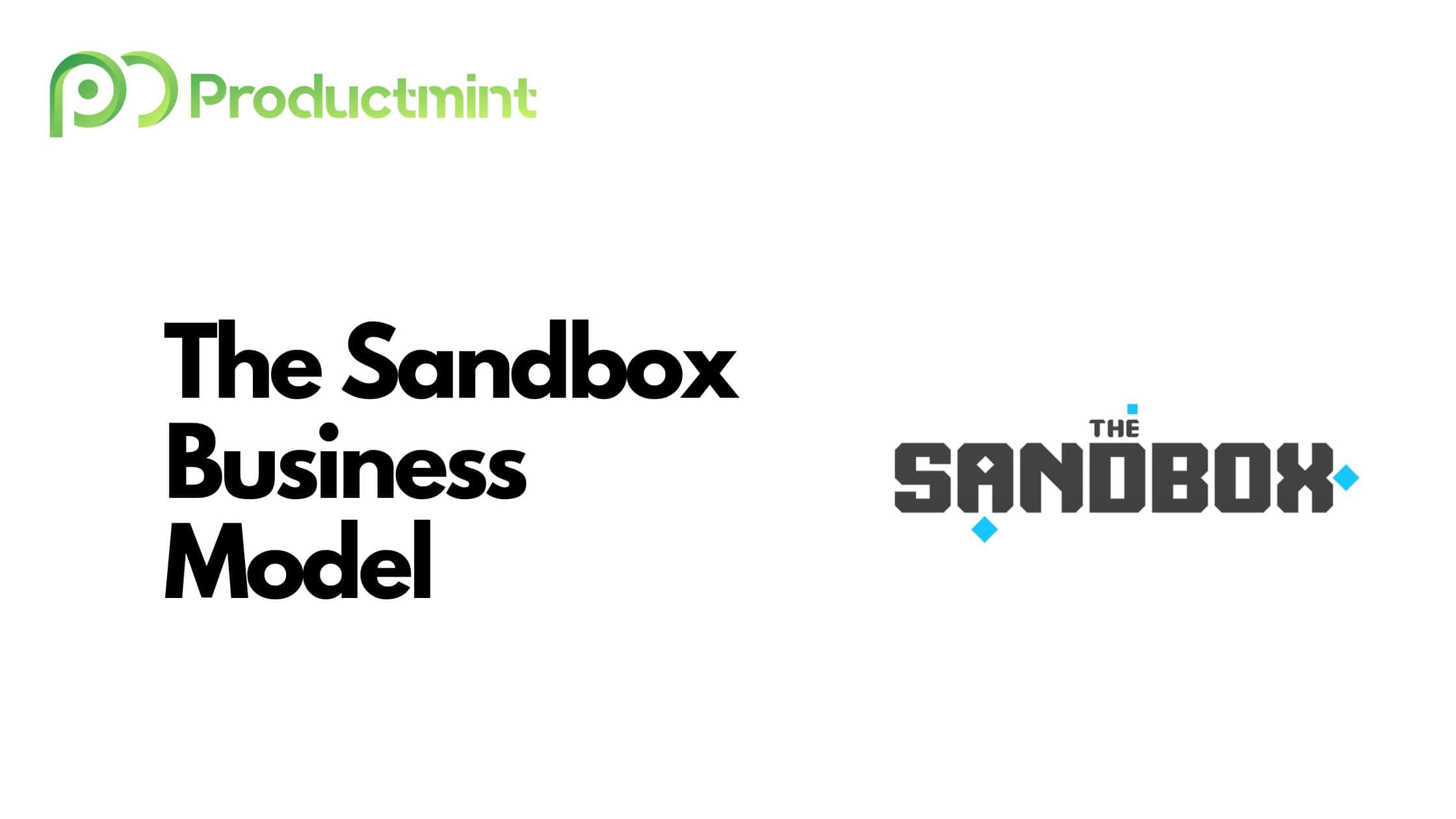 The Sandbox is a gaming ecosystem that allows its users to create and monetize digital assets and gaming experiences.

The Sandbox makes money by issuing and selling tokens as well as other digital assets. The business model of The Sandbox is predicated on driving up demand for those tokens.

Launched in late 2021, The Sandbox is one of the most sought-after metaverse games. It has raised around $95 million in funding.

What Is The Sandbox?

The Sandbox is a gaming ecosystem that allows its users to create and monetize digital assets and gaming experiences.

Players can explore its ecosystem by creating their own avatar, which they can customize or use to enter games as well as engage with other players.

The platform, just like Roblox, provides its users with the necessary tooling to create in-game assets and activities. For example, its VoxEdit software enables creators to design non-fungible token (NFT) art or animated objects using its Skeleton System.

Digital art can consequently be sold and traded on The Sandbox’s native marketplace. This allows users to monetize their creations. In order to be able to sell digital artwork, artists need to join the platform’s Creator Fund.

SAND is used to purchase assets as well as digital plots of land. Furthermore, SAND can also be used to buy CATALYSTs and GEMs, which are needed to create ASSET tokens.

Catalysts are ERC-20 tokens that describe the scarcity of one’s ASSETS and include four tiers, namely Common, Rare, Epic, Legendary.

Gems, also ERC-20 tokens, are used to provide ASSET attributes. Consequently, the more attributes an ASSET has, the greater its value.

Lastly, The Sandbox also plans to move towards becoming a decentralized autonomous organization (DAO), which means it would be governed by its users. Users will be able to vote on what features the company develops or policies it establishes. Voting power is determined by the number of SAND tokens a user owns.

The Sandbox metaverse can be accessed and played by connecting your email, social profiles, or Metamask wallet.

The Sandbox, headquartered in Hong Kong, was founded in 2011 by Arthur Madrid as well as Sebastien Borget.

Back in 2007, Madrid and Borget launched their first business, dubbed Wixi, together. Wixi was a social network where users would interact with each other by privately watching, posting, and sharing content of all media types such as audio, pictures, and video.

Unfortunately, after four years in business, the founders had to shut down Wixi. That same year, in 2011, the two pivoted from social networks towards game development by starting Pixowl, a studio focused on developing mobile games.

In May 2012, Pixowl released its first game for iOS (followed by an Android version in February 2013): The Sandbox.

The 2D game, which closely resembled Minecraft, allowed players to create physical elements such as water, electricity, sand, lava, and more. These elements could then be put together to create objects that players would interact with.

Within a year, The Sandbox was downloaded over two million times. Apple even named The Sandbox one of the best games of 2012. Over the coming years, The Sandbox continued to grow in popularity.

In 2016, Pixowl released a second version of the game called The Sandbox Evolution. By April 2018, the game had surpassed over 40 million lifetime downloads. However, just a month later, both the game’s as well as Pixowl’s trajectory would change forever.

During the Pocket Gamer Connect conference in San Francisco, Pixowl announced that it would release a 3D version of The Sandbox that would be powered by blockchain technology. A few months later, in August, Pixowl officially sold to Hong Kong-based Animoca Brands for $4,875,000.

Animoca, a mobile game developer itself, had begun to embark on a strategic shift. It sold off many of its mobile games while raising additional cash from investors. All that money was used to acquire and invest blockchain (and AI)-focused gaming companies, with Pixowl being one of them.

Over the coming months, the founders continued to build up hype for The Sandbox. In December 2018, for example, it introduced a $2 million creator fund and unveiled its VoxEdit software editing tool. The developers even allowed to port over VoxEdit creations into Minecraft to further accelerate adoption.

In November 2019, The Sandbox raised $2.5 million in a combined investment as well as token sale. A month later, it issued its first LAND auction and successfully managed to sell 3,000 pieces of LAND (out of a total of 166,464 pieces).

Throughout the beginning of 2020, The Sandbox initiated two more auctions, which both sold out within minutes. All of these auctions were conducted in Ether (ETH). In August, The Sandbox held another token sale, this time offering SAND via the Binance Launchpad platform. Binance itself also purchased over 4,000 LAND tokens to further push the platform.

By the end of 2020, without the game even being released, The Sandbox had already managed to sell over 20 percent of all available LAND plots. The platform, furthermore, scored partnerships with over 65 other businesses and franchises, including Manchester City, Atari, The Smurfs, and more.

Hype-building remained the single largest activity that The Sandbox’s representatives engaged in throughout 2021. These were further supported by collaborations with the likes of The Walking Dead (July) or Snoop Dogg (September).

However, the biggest boost to its game came on October 28th when Facebook CEO Mark Zuckerberg announced that the company he founded would be renamed to Meta (alongside a shift to VR). Interest in metaverse-focused platforms such as Decentraland or The Sandbox literally exploded overnight.

Finally, after more than three years of development, The Sandbox finally opened itself up to players. On November 29th, 2021, The Sandbox started the Alpha version of its metaverse game. Demand was so high that the game even crashed for a few hours.

A day after the launch, The Sandbox even managed to sell a LAND property for $4.3 million to Republic Realm. Over the course of the first month, The Sandbox recorded over $100 million in virtual land sales.

How Does The Sandbox Make Money?

Throughout its existence, as detailed in the previous chapter, The Sandbox has hosted multiple auctions during which those assets were sold.

In August 2020, for example, 360,000,000 SAND tokens (equal to 12 percent of the token’s total supply) would be sold via Binance’s Launchpad. In December 2021, right after its Alpha launch, The Sandbox unveiled an NFT collection dubbed Gears and Ducks.

As a result, the business model of The Sandbox is predicated on maximizing demand for its various tokens.

One of the ways with which it drives demand is by partnering with various franchises that then partake in its metaverse. For example, the Walking Dead is slated to launch a dedicated game within The Sandbox in 2022.

Another way with which The Sandbox is able to drive demand for its tokens is by issuing plots of land to other users. Users pay for the land using SAND and receive LAND tokens in return. These users can then create revenue-generating activities on the plots of land they own.

Moreover, users also have the ability to stake their SAND tokens. Whenever a transaction on The Sandbox occurs, the user will have to pay 5 percent in transaction fees.

50 percent of those fees then go to the Staking Pool to serve as rewards for token holders. The other 50 percent goes to the foundation behind The Sandbox. The foundation then distributes the tokens it holds in reserve to participants of the ecosystem, for example by paying developers who add features to its game.

In the future, as outlined in its whitepaper, The Sandbox also plans to add player subscriptions as well as advertising. There, it will take a percentage cut from the revenue it derives.

The Sandbox, according to Crunchbase, has raised a total of $95 million across four rounds of venture funding.

The Sandbox’s company valuation is currently not being disclosed. Furthermore, and as previously disclosed, The Sandbox does not generate any revenue through its platform.

Who Owns The Sandbox?

The Sandbox is owned and operated by Hong Kong-based Animoca Brands, which develops, publishes, and invests in games.

Animoca Brands had acquired Pixowl, the studio behind the original The Sandbox game, in August 2018 for $4,875,000.

Animoca has developed and released games like Crazy Defense Heroes or Base One as well as invested in companies such as Sky Mavis (maker of Axie Infinity) or Dapper Labs.

In the next few years, The Sandbox plans to move towards becoming a DAO, which would effectively shift control to its players.

Players can vote on new features or other initiatives through their ownership of the SAND token. The Sandbox will continue developing the platform while owning zero percent of it.