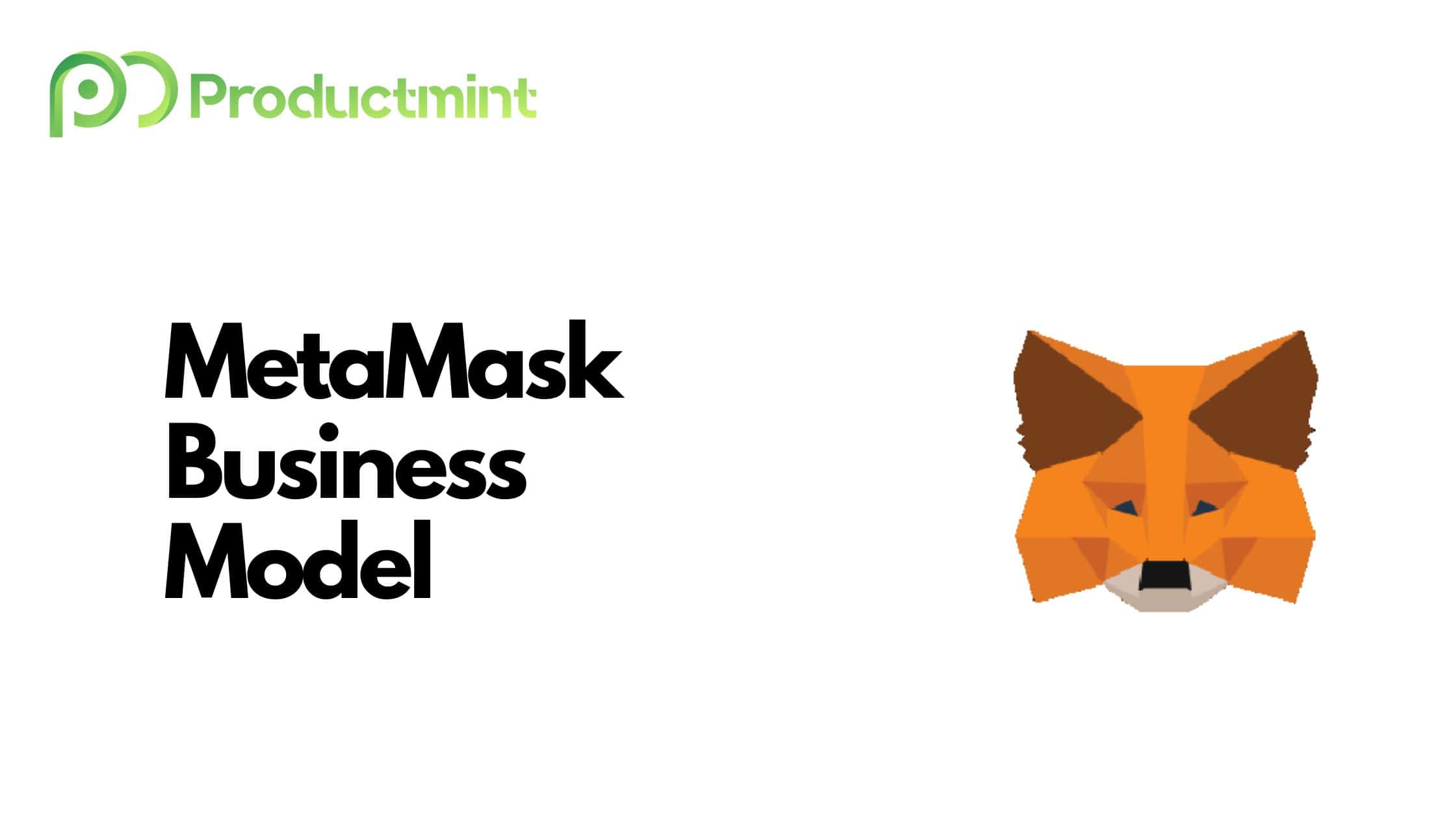 MetaMask is a cryptocurrency wallet that allows users to exchange and store any Ethereum-based (ERC-20) tokens.

MetaMask makes money from swap fees, management fees, as well as by selling merchandise via its online store.

Launched in 2016, MetaMask has risen to become the world’s leading Ethereum wallet. It is used by more than 21 million people across the world.

MetaMask is a cryptocurrency wallet that allows users to exchange and store any Ethereum-based (ERC-20) tokens.

Users, therefore, can engage with decentralized applications (Dapps) such as Rarible or Uniswap and transact on those platforms using the tokens they hold in the wallet.

Whenever you want to swap a token, you will be presented with a multitude of quotes. Since MetaMask has access to a great selection of Dapps, it can ensure that users will always get the best deal (thus minimizing gas fees).

MetaMask itself is developed and maintained by blockchain technology company ConsenSys. However, given that it is open-source-based, it also relies on contributions from its community to improve upon the product.

Here’s how it works. First, you either download its browser extension (available on Chrome and Firefox) or Android and iOS mobile app.

After successfully installing the application, you will be prompted to create a wallet. This wallet is secured by a secret backup phrase, which is used to backup and restore one’s wallet.

In order to deposit cash or tokens into the wallet, users can connect their wallet with various centralized exchanges (such as Binance’s Smart Chain) or buy Ether with a debit card or Apple Pay.

MetaMask, which is developed and maintained by New York City-based ConsenSys Inc., was launched in July 2016.

ConsenSys itself was founded by Joseph Lubin who graduated from Princeton with a degree in Electrical Engineering and Computer Science in 1987.

After multiple stints in tech and finance, amongst others building software for Goldman Sachs or running a successful quant hedge fund, he found himself being drawn to the concept of decentralization.

In late 2011, he read the famous Bitcoin whitepaper by Satoshi Nakamoto, which led him to have a proverbial lightbulb moment.

However, it would take another two years until he finally got himself involved. Mutual contacts introduced Lubin to Vitalik Buterin, the then 19-year-old mastermind behind the Ethereum whitepaper.

Months later, in July, the group was able to raise $18 million through an initial coin offering. Lubin himself was rumored to be one of the biggest buyers of Ether, Ethereum’s native token, during its initial crowdfunding.

Unfortunately, disagreements about the future of Ethereum would soon lead to the departure of some of its founding members. While Buterin wanted Ethereum to remain decentralized (which ultimately led to the creation of the Ethereum Foundation), Hoskinson and Lubin believed that Ethereum’s future was to serve a commercial purpose.

As a result of their disagreement, Lubin hatched the plan to create an ecosystem of products and businesses around Ethereum. This ultimately led him to start ConsenSys.

ConsenSys acts as a quasi-startup-studio that provides technology services to other companies, incorporates and launches Ethereum-based businesses, and even invests in other startups. The company itself would be funded by Lubin’s personal wealth who, after acquiring a significant stake in Ethereum, is believed to be a multi-billionaire.

One of the businesses that came out of ConsenSys was MetaMask whose development was led by Aaron Davis and Dan Finlay, two seasoned software engineers with stints at companies like Apple. MetaMask was ultimately released to the public in July 2016.

Back then, the Ethereum ecosystem was still in its infancy which meant that adoption of the wallet was fairly slow. The first signs of its staying power came in 2017. A worldwide crypto craze led Bitcoin’s price to ascend to $20,000 while solidifying Ethereum’s position as the clear number two.

This was probably best exemplified by the hype around CryptoKitties, an Ethereum-based blockchain game. The game, which users could access via their MetaMask wallets amongst others, even caused the Ethereum network to significantly slow down.

As a result of wider crypto (and more specifically Ethereum) adoption, MetaMask managed to record one million downloads by March 2018. Unfortunately, the greater adoption also led to increased scrutiny.

In February 2019, for instance, cryptocurrency scammers had inserted malware into a Play Store app, which secretly extracted a user’s wallet keys.

Talking about Google’s Play Store, MetaMask finally unveiled beta versions of its mobile apps in July, releasing them for both Android and iOS devices.

The launch in Apple’s App Store, which traditionally offers much stronger vetting procedures, would also ensure that scammers had a tougher time stealing sensitive information. Additionally, in many developing nations, users access the internet primarily through their phones (and mostly via Android devices), which allowed MetaMask to vastly expand its addressable user base.

However, in late December 2019, its app was yet again pulled from the Play Store. Luckily, it returned a week later. Despite those minor setbacks, the team continued to plug away with new updates.

Over the summer of 2020, which later became known as the DeFi summer, users began swarming to the platform. By October, MetaMask managed to hit the inaugural mark of one million monthly active users, which was accelerated by increased usage of DeFi protocols like Uniswap, Yearn Finance, Curve, or MakerDAO.

MetaMask further capitalized on the DeFi trend by launching its institutional offering in December, allowing trading firms and other financial organizations to access popular DeFi protocols in a compliant and secure manner.

By April 2021, MetaMask had already managed to increase its active user base to over five million. Most of that growth came from developing countries in Africa, Asia, and South America, with Nigeria and Vietnam leading the pack.

The success of MetaMask and its other products, which entail development environment Truffle or open-source blockchain protocol Quorum amongst others, allowed ConsenSys to raise a second round of funding worth $65 million. ConsenSys had previously raised $10 million in July 2019.

Yet again, the summer of 2021 ended up being extremely kind to the wallet. Apart from the continuous DeFi boom, it also was able to add users due to the advancements of NFTs as well as blockchain-based games like Axie Infinity.

Within a matter of four months, MetaMask managed to grow from five to over ten million monthly active users. Even ongoing and ever-more creative phishing attempts weren’t able to stop it from growing.

As a result, ConsenSys was able to raise yet another round of funding in November. This time, investors poured in a combined $200 million into its parent company. MetaMask is now the leading Ethereum-based wallet with more than 21 million users worldwide.

How Does MetaMask Make Money?

MetaMask makes money from swap fees, management fees, as well as by selling merchandise via its online store.

The majority of the revenue that MetaMask generates comes from the swap fees it charges. Launched in October 2020, the feature allows users to compare and swap tokens directly within MetaMask.

MetaMask ensures that its users always have access to the greatest possible selection of tokens, which ultimately minimizes prices and gas fees.

Furthermore, rates can sometimes swing within a matter of seconds (referred to as slippage), thus resulting in big swings between the time an order is placed and confirmed. MetaMask allows users to set a max slippage which will atomically cancel an order if it exceeds a certain range.

MetaMask charges a service fee that ranges between 0.3 percent to 0.875 percent for its swaps. The fee itself is automatically baked into the quota of a trade (which also includes gas fees).

The institutional wallet offers much of the same functionality as the regular one. However, it also provides institutions with access to qualified custodians while ensuring compliance with existing tax laws.

Custodians include platforms like BitGo, Qredo, and Cactus Custody. Not much else is being publicized about the product, however, it can be assumed that MetaMask does already derive revenue from the product.

Much like other custodian products, such as Coinbase Custody, a management fee is being levied upon the firms it works together with. Fees are probably charged on a monthly basis.

Lastly, MetaMask also generates a little bit of revenue by selling branded merchandise via its own online store.

Users, which include both men and women, can purchase a variety of items including t-shirts, hoodies, caps, mugs, and more.

Apart from providing them with another source of revenue, the merchandise also acts as a branding channel for whoever uses or wears the items.

Furthermore, brand advocates have a way of expressing their convictions about the product and ecosystem.

ConsenSys, the company behind MetaMask, has raised a total of $275 million in four rounds of funding according to Crunchbase.

ConsenSys is currently being valued at $3.2 billion after raising $200 million in Series A funding in November 2021.

Unfortunately, ConsenSys does not disclose revenue figures for MetaMask (or the wider company) to the public.