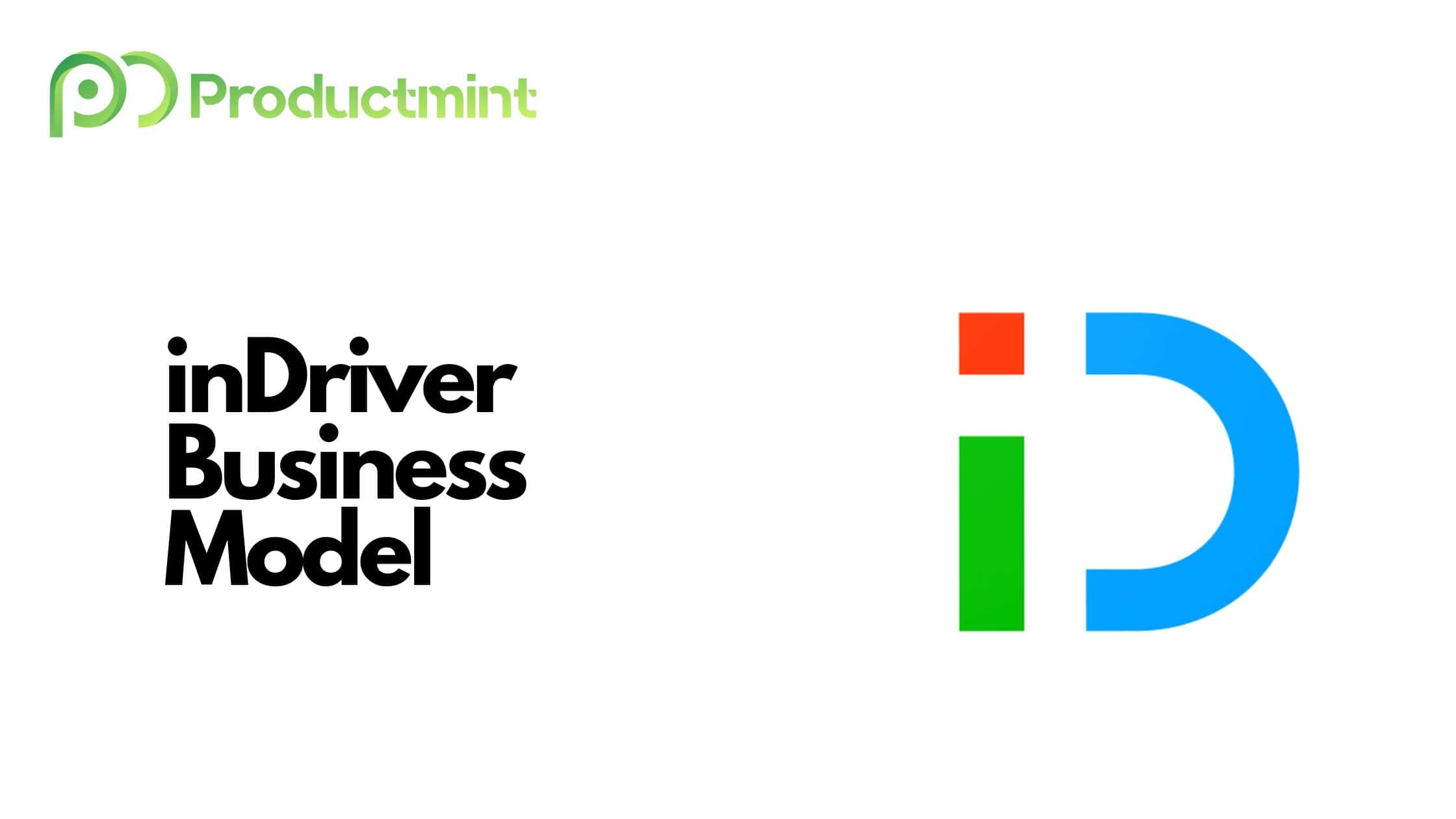 inDriver is a ride-hailing app that enables users and drivers on the platform to negotiate a fare they’re both comfortable with.

inDriver makes money by taking a percentage fee for every transaction that is facilitated via its platform. The company operates under a marketplace business model.

Founded in 2012, inDriver is now one of the world’s most popular ride-hailing apps. It is available in 45 countries and more than 650 cities.

inDriver, which is short for Independent Drivers, is a ride-hailing app that enables users and drivers on the platform to negotiate a fare they’re both comfortable with.

Normally, ride-hailing services like Lyft or Uber algorithmically calculate prices based on the location, distance, the current demand, and the number of available drivers.

As a result, prices for the same distance can substantially increase – a concept referred to as surge pricing.

inDriver flips that concept on its head by allowing the user, that is the person wanting to hail a ride, to propose the price.

Here’s how it works. First, users need to download the app, which is available for both Android and iOS devices. After setting up their account, users can get ahead to book a ride.

Users enter their origin and destination as well as the price they are willing to pay for a ride. The only way inDriver affects price setting is by imposing a minimum fee so that drivers still earn enough.

Drivers can then bid on the fare the user determined instead of being automatically assigned to a ride, which is the modus operandi of many other ride-hailing platforms.

Users will be presented with some additional information, such as a photo of the driver as well as their rating on the platform, to ease the decision-making process.

Other safety features that inDriver has include real-time location sharing for passengers and drivers, 24/7 chat support, as well as an immediately accessible emergency button.

inDriver, which is headquartered in Mountain View, California, was founded in 2013 by Russian entrepreneur Arsen Tomsky.

However, its story dates back to over a year prior in the outskirts of Siberian Russia. Aleksandr Pavlov, then a student of radio physics and electronics at Yakutsk’s North-Eastern Federal University, worked part-time as a construction worker to finance his studies.

Yakutsk is often referred to as the coldest city on earth, with temperatures often reaching over minus 40 degrees Celsius during winter.

Unfortunately, public transportation options, especially after the downfall of the Soviet Union, only kept getting worse. Meanwhile, local taxi drivers continued to increase their prices as the years went on.

Pavlov eventually became fed up with the whole situation and decided to do something against it. Sometime in 2012, he created a group on the Russian social network VKontakte, which was started by Telegram founder Pavel Durov, which listed local drivers and their phone numbers.

He was clearly up to something. Just months after the launch, over 50,000 people had joined the group – particularly impressive considering that Yakutsk only boasts around 300,000 citizens.

In early 2013, Pavlov received somewhat of an unexpected message in his inbox. Arsen Tomsky, who had made a name for himself by operating the local news site Ykt.Ru, offered to purchase the group for $10,000.

Pavlov initially refused but not long after received a draft notice from the Russian army, which imposes a yearly military service on all males aged 18 to 27. But life ultimately had other plans for him.

Right after selling the business to Tomsky, Pavlov broke his arm and thus wasn’t able to join the military. Luckily, Tomsky offered him a job to join his software company Sinet, which had begun to work on transforming the VKontakte group into an Android app.

That Android app eventually turned into inDriver, which the pair launched a few months later in 2013. And don’t feel too bad for Pavlov: he rose to become one of inDriver’s most important employees and currently serves as its Chief Mobility Hub Officer.

However, unlike the likes of Grab, Lyft, Uber, and others, Tomsky chose to not raise billions of dollars but instead focus on healthy and sustainable growth. For example, it took more than a year until inDriver expanded from its hometown of Yakutsk to a second Russian city.

The founder would often travel to the cities that inDriver launched in himself and even personally engage with the drivers that chose to work for it. The first time that inDriver expanded beyond its Russian borders was in late 2014 when it launched in Kazakhstan.

Over the coming three years, Tomsky continued to bootstrap the business and refine the model. Finally, in September 2017, he raised a first round of $5 million (Series A) by LETA Capital to finance the app’s launch in Moscow and St. Petersburg, which were dominated by Uber and Yandex.

A mere 11 months later, in August 2018, inDriver raised an additional $10 million from the same investors. The company used that money to expand across the pond into Colombia, Peru, Chile, Guatemala, and Mexico as well as move its headquarters from Russia to California.

One key characteristic when deciding on a new market was the country’s culture. Tomsky, in previous interviews, stated that he was looking for countries whose citizens enjoyed haggling and negotiating with others instead of purchasing things outright.

At the time, Uber was going through an extremely rough patch, which eventually resulted in the ousting of founder Travis Kalanick.

That same year, in 2018, inDriver also expanded into Africa for the first time by launching in Tanzania. It ended the year with 14 million users and a launch in one of the world’s most competitive taxi markets: New York City.

Over the coming months, inDriver continued to focus on launching in places that the big guys traditionally avoided. In particular, it vastly expanded its footprint across Africa as well as South America.

The firm’s steady growth was rewarded with yet another funding round whose timing couldn’t have been better. In January 2020, inDriver raised $72 million in Series B funding while being valued at $472 million.

The cash injection served as a helpful puffer to weather the sudden decline in revenue that the Covid-19 pandemic had brought on. Luckily, a year into the pandemic, inDriver was focusing on expansion once again.

Said expansion was financed by the $150 million in Series C funding the company raised in February 2021. Interestingly, founder Tomsky waited until September to announce the fundraise. In October 2021, inDriver managed to cross the inaugural mark of 100 million downloads while being available in over 35 countries.

However, not all of its launches always went according to plan. Much like Uber, the company caught some heat for launching without obtaining the required licenses (such as in Lagos, Nigeria in May 2022).

In many countries, such as Pakistan, inDriver is now the most popular ride-hailing app. It has utilized that popularity to not only expand its geographic reach but also began to work on launching associated services such as food delivery.

How Does inDriver Make Money?

inDriver makes money by taking a percentage fee for every transaction that is facilitated via its platform.

The company charges between 5 percent to 8 percent in commission, depending on the market it operates in.

This is considerably lower than many of its biggest competitors. European ride-hailing company Bolt charges between 10 percent to 25 percent in commission while Uber takes a flat 25 percent.

As a result, the price that consumers pay is often below those of its competitors as well, which explains portions of inDriver’s rapid growth (another reason is the auction mechanism).

However, drivers are still incentivized to stay on the platform because they end up earning more money due to the lower commission they are charged with.

This dynamic directly ties into inDriver’s business model. One key requirement of being a successful marketplace like Airbnb is to ensure sufficient liquidity.

In ride-hailing, this means that the platform can immediately fulfill any potential demand. To do that, it needs to have sufficient supply in the form of capable drivers. Competitive prices as well as low waiting times and ensuring the safety of customers are the cherries on the cake.

Furthermore, inDriver does not heavily invest in marketing and tries to grow by word-of-mouth. It uses those savings in marketing spending to incentivize drivers to join the platform by not charging commissions in the first 6 to 12 months of operating in a new location.

Its hope is that both drivers and riders get attached to the product experience and thus remain with the platform beyond the introduction of commissions. There are certainly signs that point towards that being the case.

Recently, inDriver became the most popular ride-hailing app in Pakistan, which is particularly impressive considering it competes against juggernauts like Careem, Ola, and Uber in the country.

Going forward, inDriver’s aims to expand into other categories to leverage the popularity of its core platform – a similar tactic employed by the likes of Bolt and Uber, among many others.

inDriver has already introduced courier services and freight transportation via trucks. It is currently working on launching a food delivery arm as well.

Much like the ride-hailing business, it would simply take a percentage commission, in this case from the restaurants that sell on its platform.

inDriver, according to Crunchbase, has raised a total of $237 million across four rounds of venture capital funding.

It counts some of the world’s biggest investors as backers including LETA Capital, Bond, Insight Partners, and General Catalyst.

inDriver is currently valued at $1.25 billion after raising $150 million in Series C funding back in February 2021.

The ride-hailing app does currently not disclose revenue figures as it remains in private ownership. In a 2019 interview with Yahoo, founder Tomsky disclosed that he expected inDriver to facilitate $1 billion in gross merchandise volume (GMV) for the year.

With a take-rate of 8 percent at best, this pegs inDriver’s annual revenue at a maximum of $80 million in 2019.

However, given that the firm heavily incentivizes drivers to join its platform by not imposing fees for the first 6 to 12 months of a newly launched market, that figure is likely lower.

On the other hand, inDriver has since expanded into dozens of new markets and services, which likely means that its revenue has significantly expanded over the past two fiscal years.