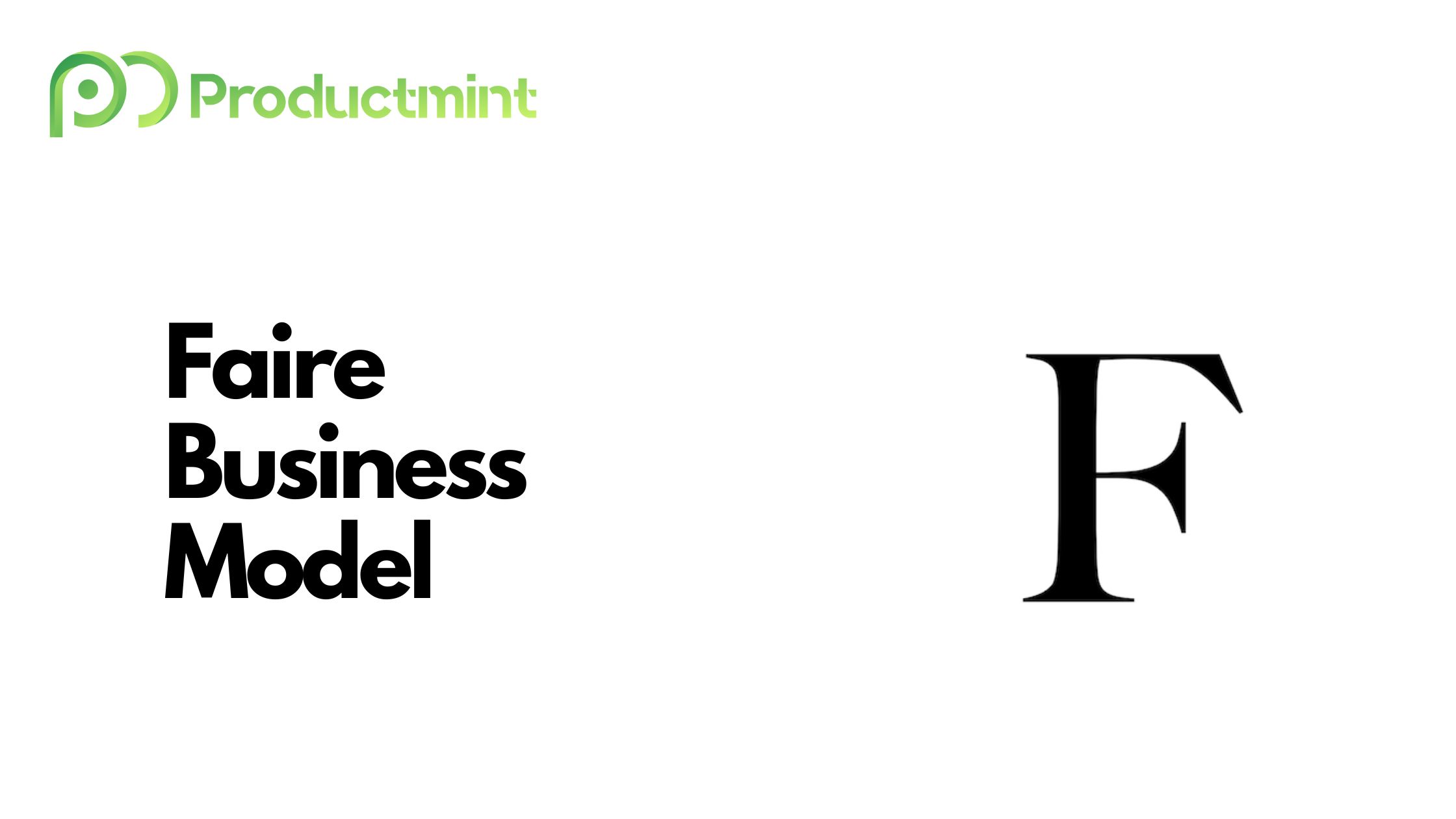 Faire is a platform that connects small retailers with brands and manufacturers to purchase items at wholesale prices.

Faire makes money by taking a commission from each sale on its platform as well as subscription fees paid by retailers. It operates under a marketplace business model.

Founded in 2017, Faire has grown into a company worth $12.6 billion. Its founders have raised over $1.7 billion in funding thus far.

Faire is a platform that connects small retailers with brands and manufacturers to purchase items at wholesale prices.

Buying products on Faire is fairly (no pun intended) straightforward. After creating an account, retailers simply browse the 85,000+ brands that sell on the platform.

Each brand sets a minimum order volume that the retailer has to meet. The first order can be returned at no cost while Faire offers net 60 payment terms to help retailers buy and sell products without having to pay for them upfront.

Categories that retailers can shop in entail fashion, home décor, jewelry, beauty & wellness, and many more.

The best and most reliable sellers on Faire receive a so-called Top Shop badge on their shop page and products throughout Faire.

Faire’s own editorial team even handpicks and highlights the best apparel and footwear brands via its Showroom feature.

Faire is currently available in over 20 countries across North America and Europe. The platform itself can be accessed by visiting its website or downloading Faire’s mobile apps (available for Android and iOS devices).

Detailing the Founding Story of Faire

All of the 4 co-founders essentially met while working at payments giant Square (now Block). CEO Rhodes, for example, was first managing the Cash App and then moved on to Square Capital, the firm’s financing arm.

After 5 years at Square, Rhodes wanted to take a break to decide what he wanted to do next. He then managed to convince Perito and the rest to join him. In a 2019 blog post, he reminisced about his decision to make those guys his co-founders:

“Starting a company is hard. When I started Faire, I wanted to surround myself with the best people I had worked with. That’s why I teamed up with Marcelo, Daniele, and Jeff.”

Knowing that he assembled a rockstar team, they initially experimented with a variety of ideas, ranging from car insurance for low-income immigrants to reinventing payments in healthcare.

Rhodes ultimately landed on the idea for Faire due to a past experience of his. Back in 2011, he tried to launch a luxury umbrella brand by importing the product from New Zealand.

Unfortunately, none of the popular retailers wanted to feature the brand because it wasn’t popular enough. As a result, he wound up wasting thousands of dollars attending various trade shows.

And as it turned out, these were the exact same frustrations that many small and unknown brands experienced as well. On top of that, mom-and-pop shops would start to have a much tougher time competing against the likes of Amazon and Walmart, which were dominating online and offline retail.

However, not everyone was seeing this vision through. Jeffrey Kolovson departed from Faire months before it launched to lead Opendoor’s business development team. The three remaining founders went full steam ahead, though.

They first raised a small pre-seed round of $500,000 from Khosla Ventures, Y Combinator, SV Angel, and a group of angel investors. Finally, in March 2017, they launched what was then called Indigo Fair.

Not long after the official launch, they topped up their seed round with another $3.4 million from the same investors. Subsequent participation in TechCrunch’s Disrupt event and the famous Y Combinator startup accelerator continued to raise the firm’s profile.

Nonetheless, it was still taking a metric ton of work to get the marketplace off the ground. After all, they needed to attract both brands and retailers to make the product viable for both parties involved.

One of the keys to growing the retail side was Indigo Fair’s 90-day payment terms and free returns, which led many shops to at least give the platform a try. Another growth hack the team employed was to list products from marketplaces like Etsy in order to create the appearance of a thriving brand ecosystem.

All of those initiatives proved to be working, which was made evident by the $12 million in Series A funding the firm raised in February 2018. And just 10 months later, the now-rebranded Faire raised another $100 million at a valuation of $535 million.

The founders had discovered true product-market fit. Its retail base grew a whopping 3,140 percent in 2018 alone. All of those positive announcements prompted Jeffrey Kolovson to return as Faire’s COO back in May 2019.

That same year, Faire introduced over 400 international makers to its platform and expanded into Canada, thus highlighting its commitment to becoming a true global wholesale powerhouse.

It, therefore, wasn’t surprising when Faire amassed a $1 billion valuation after raising $150 million in Series D funding (October 2019). In fact, it took the founders less than 3 years to reach unicorn status.

And even though the Covid-19 pandemic put a temporary and somewhat painful dent into its business (since retailers had to shut down for months), Faire continued to grow at a rapid pace once the smoke cleared.

One of the ways it managed to stomach the pandemic pains was to help many of its smaller retail partners to set up online shops through which they could continue selling.

Nevertheless, Faire still tripled its bottom line from mid-2019 to mid-2020, which allowed the founders to raise yet another round of funding. This time, in October 2020, they raised $170 million in Series E funding at a valuation of $2.5 billion.

Over 100,000 independent retailers were already partaking in the platform. The funding, furthermore, enabled Faire to expand across the pond into Europe. It first (03/2021) launched in the U.K. followed by around 10 other countries such as France and Germany (06/2021).

Around the same time, Faire raised yet another round of funding. This time, investors poured $260 million into the business, valuing it at $7 billion. And the low-interest rate environment proved to be the perfect breeding ground for further financing.

Faire landed another $600 million across two rounds of Series G financing in November 2021 and May 2022, respectively. During both rounds, Faire was valued at $12.6 billion, making it one of the most valuable startups in the United States.

And while many other businesses had to retract and lay off significant portions of their workforce due to the recession, Faire continued to hire and expand like crazy.

Today, Faire employs over 1,500 people across multiple offices in the United States, Canada, the United Kingdom, Germany, and many other countries.

How Does Faire Make Money?

Faire makes money by taking a commission from each sale on the platform as well as subscription fees paid by retailers.

The overwhelming majority of the revenue that Faire generates comes from the 15-percent fee it charges to merchants for every successful transaction.

Interestingly, the platform ups that fee to 25 percent for first-time orders. Should a retailer reorder from the same brand, then it pays the regular 15 percent.

Apart from charging commissions, Faire also makes money by offering a subscription program to active retailers on the platform.

Retailers, by paying a small monthly subscription fee, get access to a variety of benefits such as free shipping for the majority of brands or earlier access to certain products.

While Faire does not publicly disclose how much it charges for the subscription, it is hugely beneficial to the firm nonetheless. Most importantly, it adds a predictable revenue stream to its bottom line, which it can then utilize to invest in the platform and associated services such as fulfillment.

All of those revenue streams tie into Faire’s marketplace business model that the company operates under. More precisely, Faire runs a two-sided marketplace that connects (small) retailers with brands willing to sell their products.

One of the keys to ensuring success for all parties involved is the usage of artificial intelligence (AI) and machine learning (ML).

For example, each product search on the platform yields a different result that is based on parameters such as the user’s previous search history, past purchases, location, and so forth. Product suggestions are consequently more relevant, thus increasing the chance of a sale.

Key to ensuring that the marketplace is thriving is having sufficient liquidity. This means that the platform is able to satisfy any type of demand that may arise.

One of the biggest incentives for brands to join is the fact that they can tap into hundreds of thousands of retailers. Traditionally, getting shelve space at chains such as Walmart or Whole Foods is an extremely tough undergoing.

Many of Faire’s brands are now selling to retailers across the globe, which consequently raises awareness for their own products.

They also benefit from Faire’s referral program, which gives them $100 in credits as well as free shipping for every retailer they bring on. And the more retailers that are joining the platform, the greater the incentive for brands to do the same.

Apart from getting access to all kinds of brands, retailers also benefit from free worldwide shipping, no import duties, and financing of up to $20,000 for the most successful ones.

This is also where the beauty of Faire’s business model comes into play. It currently issues those loans without charging application fees or interest. Going forward, it could add a fairly lucrative revenue stream by simply imposing interest on those loans. After all, platforms like Square or Shopify generate substantial revenue from financing solutions as well.

On top of that, Faire could allow brands in need of additional exposure to advertising on the platform for which it then would collect fees as well.

As of right now, Faire continues to focus on growing its marketplace by expanding into new territories as well as onboarding new brands and retailers.

Faire, according to Crunchbase, has raised a total of $1.7 billion across 12 rounds of venture capital funding.

Notable investors include the who’s who of VCs such as Sequoia Capital, Y Combinator, Khosla Ventures, Lightspeed Venture Partners, and many others.

Faire is currently valued at $12.6 billion after having extended its Series G round by another $416 million back in May 2022.

While Faire isn’t disclosing revenue figures, it did say that transaction volume on the platform (GMV) reached north of $1 billion in 2021.

Assuming that most of the customers are charged 15 percent in commission, this means that the firm generated at least $150 million in revenue during the fiscal year 2021.

To be fair, this number does not entail its subscription revenue stream, which likely brings in a low-seven figure sum on an annual basis.