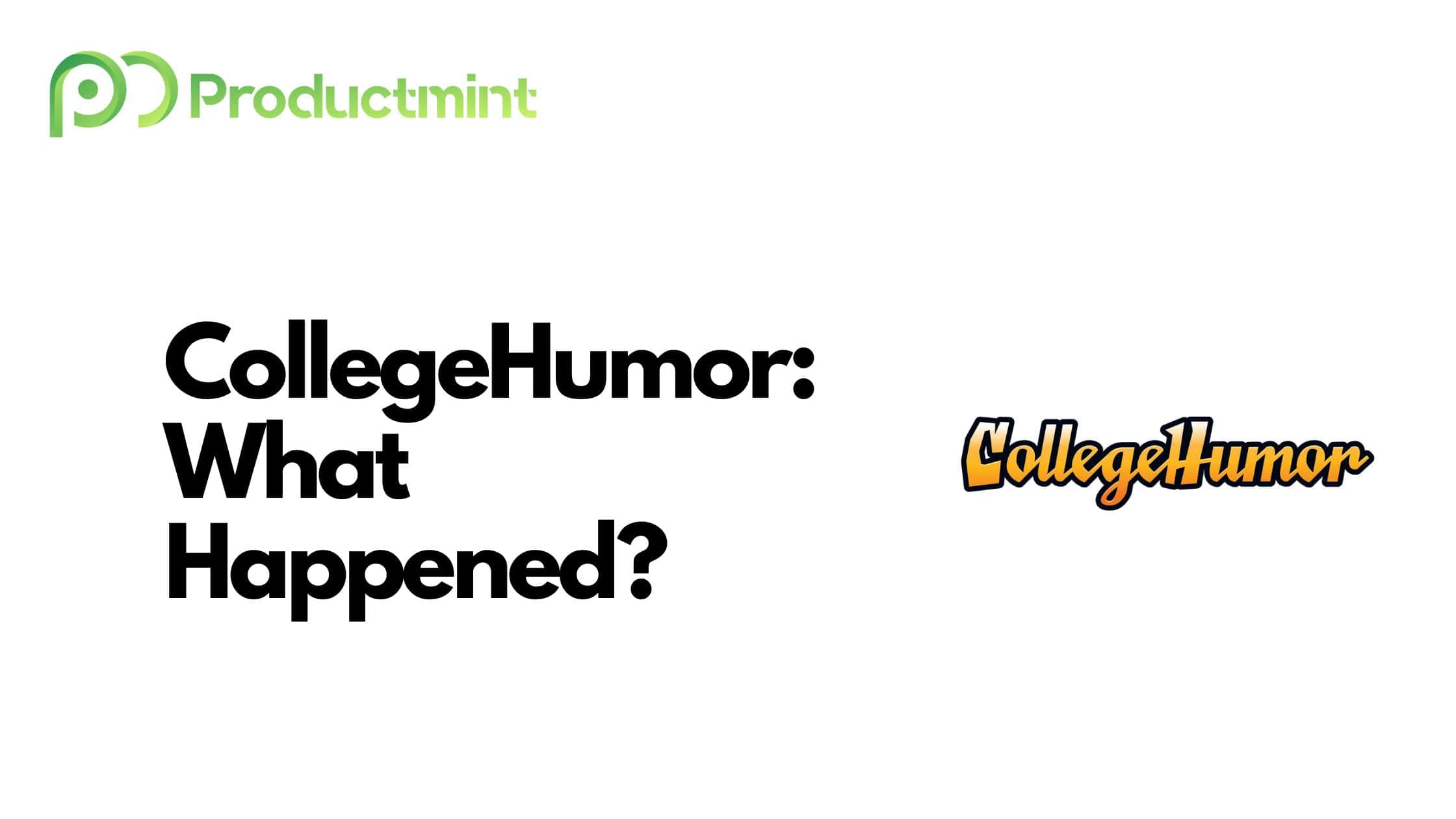 CollegeHumor is an online media company that produces and distributes comedic content across a variety of platforms.

Its previous owner IAC sold off its majority stake in the company in January 2020 to long-time employee Sam Reich, who was forced current CEO Sam Reich to lay off most of its employees.

CollegeHumor is an online media company that produces and distributes comedic content across a variety of platforms.

CollegeHumor is most notably known for creating short-formed video sketches that would last between two to five minutes.

Throughout its existence, CollegeHumor has, furthermore, released different forms of media such as an MTV show or a game for the Nintendo 3DS.

Apart from its own branded content, CollegeHumor also releases content on its own streaming service called Dropout.

The streaming service can be accessed by paying a monthly subscription fee of $5.99. Content can be consumed on its website as well as by downloading its mobile app (available on Android and iOS devices).

Unfortunately, the company has struggled to stay afloat in recent times. How it came to be, who is behind it, and how relevant it is today will be covered in the next few sections.

What Happened To CollegeHumor?

CollegeHumor, built and maintained by CH Media, was founded in 1999 by Josh Abramson and Ricky Van Veen.

When Abramson eventually left for college in 1999, he quickly found himself in need of money to fund his drinking ambitions.

During his high-school days, he was making money by playing piano in various bars and clubs, which simply wasn’t possible where he ended up studying (at the University of Richmond).

Even prior to attending college, Abramson and Van Veen were always keen on starting a business together. At the time, Abramson’s brother was working at ad.com, which sold advertising slots on content-driven websites.

He would often rave about how much those sites would be making. For example, the person behind Frog in the Blender was raking in a cool $20,000 every month from display ads alone.

This little-known fact sparked a lot of conversions between the two. As they were settling in in their respective colleges (Van Veen attended Wake Forest University), they eventually discovered that many dorm rooms were plastered with posters, pictures, and videos of college-related humor.

After months of deliberation and coding, they finally released the collegehumor.com website in January 2000.

The site was profitable right from the get-go, in large parts because its content was created for free (via user submissions or by unpaid writers) as well as due to the hefty pay-outs that those advertising network partners were providing them with.

Moreover, CollegeHumor was one of the first services of its kind and launched three years before the likes of Friendster or Myspace  (with Facebook being even further away from launch). Within six months of the launch, the two founders even received a $9 million buy-out offer, which they ultimately rejected as the cash portion was too low.

Unfortunately, a year into the business, revenue dried up after the burst of the dot-com bubble led many advertisers to retrieve from promoting their business online. However, given that they were still enrolled in college, they figured to continue building out CollegeHumor – and pursue it full-time once they would graduate.

Graduation day eventually arrived in 2003 and the two founders, alongside a few other guys they brought on, first moved to San Diego. However, they quickly realized that being in San Diego would not be beneficial to the creation of a media business, ultimately prompting them to move to New York City not long after.

Due to the ‘fratty’ nature of its user submissions, the team continued to have a tough time attracting advertising dollars. In order to take advantage of the millions of visitors that were frequenting the site every month, they figured to diversify both their revenue streams as well as a portfolio of websites.

For example, they released a premium version called CollegeHumor Raw. Another business was BustedTees.com on which they sold t-shirts and other pieces of clothing. However, the biggest business that originated out of its diversification efforts was released in December 2004.

Weeks prior, CollegeHumor had a viral hit after posting a video of Ashlee Simpson’s lip-syncing fiasco from her Saturday Night Live performance. That caused Jake Lodwick and Zach Klein, two of CollegeHumor’s early employees, to have an epiphany to create a website that would allow users to post short clips. That website is now known as Vimeo.

Ironically enough, another video platform launched just a few weeks later. Its name? YouTube. The even bigger irony was that YouTube would eventually become an integral part of how CollegeHumor grew its audience and reach. But back to CollegeHumor for now.

Around the same time, CollegeHumor also began to pivot towards original and self-published content. In August 2006, the company also made a key hire in Sam Reich who would go on to spearhead almost all content creation at CollegeHumor.

However, this was certainly not the biggest news that dropped that month. It was announced that IAC, led by legendary media mogul Barry Diller, would acquire 51 percent of Connected Ventures LLC (the company that owned CollegeHumor, BustedTees, and Vimeo) for a combined $20 million.

IAC invested considerable amounts of money to push CollegeHumor to new heights. It moved the firm from a small office into its headquarters and significantly ramped up its hiring efforts.

One of those key hires became Jake Hurwitz and Amir Blumenfeld, most notably known as Jake and Amir, who created one of CollegeHumor’s most popular shows. It managed to rake up billions of views across its eight-year runtime and even helped to push the adoption of Vimeo (where their videos were uploaded).

Towards the end of 2007, CollegeHumor also made its ambitions to go beyond online content very explicit. In September, it signed on with United Talent Agency for TV and film projects. Months earlier, rumors had emerged that the site was working with MTV Films (as part of a feature film development deal with Paramount) to develop exclusive TV content. All these deals highlighted how much weight Diller and IAC were able to put behind CollegeHumor in order to make it big.

In the meantime, other comedy outlets, mostly as a result of the great financial crisis, were folding. In 2007 and 2008 alone, NBC’s DotComedy, Turner’s SuperDeluxe, HBO’s This Just In, and an AOL-focused comedy site all had to shut down – all while CollegeHumor continued to flourish.

Months after, in February 2009, CollegeHumor finally released its first-ever TV show on MTV. As opposed to short two-minute clips, it changed its formula towards longer-form content (around 25 minutes). Unfortunately, the show never really took off and was canceled after just one season.

Despite its TV failure, CollegeHumor continued to remain the center of attention. In March 2009, it was able to make its first acquisition by purchasing sports satire site SportsPickle for an undisclosed amount.

During the summer of 2009, co-founder Van Veen also founded another company called Notional, a spinoff multimedia production company that would be responsible for developing TV shows. However, he still remained partially involved with CollegeHumor.

Meanwhile, CollegeHumor continued to put its skills to work by collaborating with other stars. In June 2010, it unveiled branded content in cooperation with Arrested Development stars Jason Bateman and Will Arnett.

That same month, it also unveiled another associated media property called Dorkly.com, which would focus on creating video-game-related comedic content. CollegeHumor itself was also able to attract some heavy hitters. In November 2010, for example, it hired seasoned media executive Paul Greenberg as its newest CEO.

Greenberg simply continued to double down on its winning formula. By the end of 2011, CollegeHumor managed to become one of the most frequented video properties in the United States. It even managed to surpass sites like Netflix or CNN’s Digital Network.

However, its growth was taking place without the involvement of co-founder Josh Abramson who, after 12 years at CollegeHumor, departed from the business in May 2011. He went on to found TeePublic and even became a venture partner at FirstMark Capital.

Meanwhile, CollegeHumor used its clout to branch out into other forms of content. For example, in February 2013 it launched a mobile game called Bout. A few months later, it unveiled BearShark, a game for the Nintendo 3DS handheld console.

It even produced a feature film named Coffee Town, released in July, which had various well-known actors, including Glenn Howerton (Dennis from It’s Always Sunny In Philadelphia) or Ben Schwartz (Parks and Recreation), starring in it.

CollegeHumor, it seemed, couldn’t fail. Many of the writers that were creating their sketches went on to work at other established media entities such as Disney or Saturday Night Live. Rumors began to emerge that IAC could sell CollegeHumor for as much as $100 million.

The site was, furthermore, able to score collaborations with a slew of celebrities. In December 2015, for example, it released a comedic rap video featuring former First Lady Michelle Obama. Half a year later, in June 2016, co-founder Ricky Van Veen also departed from the company. He joined Facebook as its VP of Global Creative Strategy to help the platform with its video ambitions.

In order to decrease its dependence on other platforms, particularly YouTube, CollegeHumor unveiled a subscription service called Dropout. By paying a monthly fee, viewers got access to exclusive comedic content that wasn’t available on its social channels.

This was particularly necessary because YouTube would sometimes flag or even ban some of CollegeHumor’s videos (especially if they contained swear words and other dicey terms). Furthermore, YouTube also began to shift its recommendation engine from short-formed sketches towards longer-form content made by the actual owners of the channel.

Over the course of the coming months and years, CollegeHumor continued to release videos on YouTube as well as produce longer content for both TV audiences and its Dropout streaming service.

Unfortunately, this wasn’t enough to save the company after all. On January 8th, 2020, IAC announced that it sold off a majority stake in CH Media to Chief Creative Officer and long-time employee Sam Reich.

Around 100 people had to be laid off. Only between 5 to 10 people would remain employed to keep the lights on. Additionally, its website was shut down and would redirect viewers to its YouTube channel.

Reich continues to lead the company as its CEO from its Los Angeles headquarters. These days, CollegeHumor has shifted its content strategy towards comedic news videos that are published on its YouTube channel. Moreover, it still releases episodes on Dropout.

No, CollegeHumor is not dead and continues to exist and publish content via a variety of online platforms.

Most notably, this includes its dedicated YouTube Channel, which now counts over 14.5 million subscribers. There, it releases comedic news videos every two weeks.

Reich is the CEO of CH Media, the holding company behind CollegeHumor as well as other media properties such as Dropout, Dorkly, Game Changer, Dimension 20, and more.

IAC, after having bought 51 percent of Connected Ventures LLC (the previous holding company behind CollegeHumor, Vimeo, and BustedTees) for $20 million in August 2006, remains a minority stakeholder in CH Media.