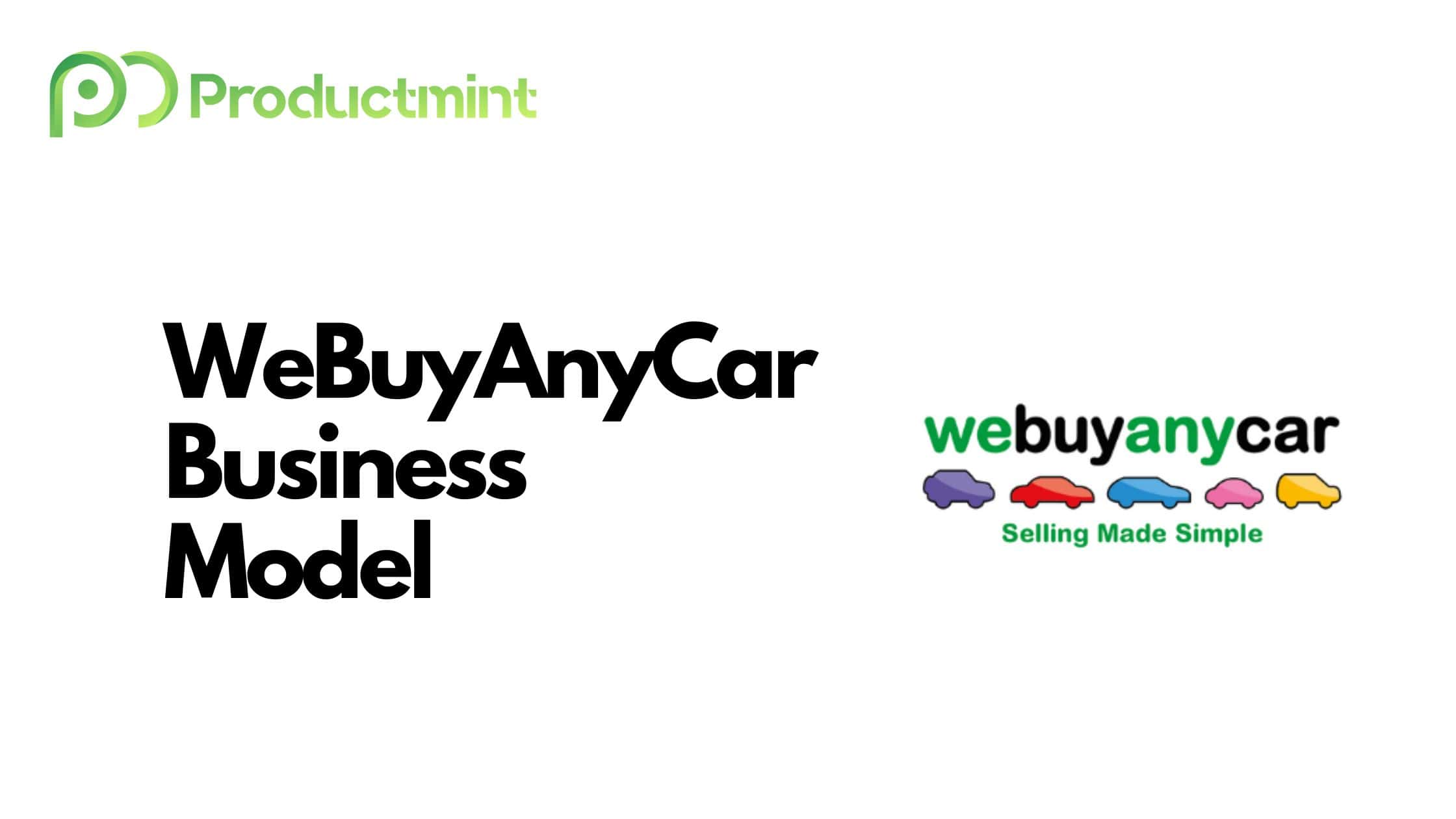 We Buy Any Car is a service that directly purchases cars from consumers. Sellers can receive a non-binding valuation within 30 seconds.

We Buy Any Car primarily makes money by selling the vehicles it purchases for a higher price than they were initially bought for.

Founded in 2006, We Buy Any Car currently operates over 500 branches in the United Kingdom. It has purchased more than 2.5 million cars since its inception.

First Of All: How Does We Buy Any Car Actually Work?

Webuyanycar.com, as the name suggests, is a service that directly purchases cars from consumers willing to sell theirs.

The firm was created based on the premise that selling your car via a traditional dealership or online classifieds sites can be both tedious and time-consuming.

Here’s how selling your vehicle via webuyanycar.com works. First, you enter the registration number and mileage details on We Buy Any Car’s website.

The website then provides you with an initial valuation within 30 seconds. We Buy Any Car, furthermore, locks the price for the next 4 days.

However, this is not the final price a vehicle is usually sold for, which means that a seller then needs to book an appointment at one of the firm’s 500+ branches. A branch in the United Kingdom is, on average, only 13 minutes away.

On the day of the appointment, you need to bring a variety of documents including the V5 (or logbook), the vehicle’s service history, ID and proof of address, bank details, and papers related to any outstanding finance payments.

The vehicle will then be thoroughly inspected when arriving at one of the firm’s branches. While there is no obligation to sell your car, We Buy Any Car also reserves the right to adjust its offer based on any issues the representative finds.

In the past, both consumers and competitors have pointed out that We Buy Any Car will regularly lower its initial online valuation.

The whole inspection process normally takes around one hour. If you agree to sell, then the money is in your bank account within the next 30 minutes.

We Buy Any Car settles any outstanding financing you have on your car, with the difference being deducted from the valuation.

We Buy Any Car, apart from operating its namesake site, is also available in the United States and operates an associated service dubbed We Buy Any Van.

Detailing The Rise & Various Controversies of We Buy Any Car

We Buy Any Car, which is headquartered in Farnham, United Kingdom, was founded in 2006 by brothers Darren and Noel McKee.

Buying and selling cars is part of the family’s DNA, to say the least. Their father, Frank McKee, founded the used car supermarket Carcraft back in 1951.

Darren and Noel started working for their father’s business when they turned 16, thus forgoing any college education.

They both started as trainees on the shop floor but eventually managed to work their way up to director-level positions.

Meanwhile, Carcraft remained firmly based in Rochdale and didn’t expand beyond its Manchester area roots. That all changed in 1998.

The brothers purchased the business from their father, who at that point was about to retire, with a £50 million loan from the Royal Bank of Scotland.

The first point of action was to take the business nationally by opening over a dozen of sites across the country. They modernized it as well, for example by launching a website, which especially back then wasn’t all too common for traditional/physical businesses.

Additionally, Carcraft grew by means of acquisitions. In 2000, they purchased a car supermarket in Newport, which was owned by Car Group, for £10 million.

Interestingly, the brothers tried to sell the business for £200 million later that year. Unfortunately, a suitable acquirer was never found, in part due to the bursting of the dot-com bubble.

Instead, they continued acquiring other car supermarkets throughout the years since the core business itself was fairly profitable. In 2003, for example, Carcraft generated £214 million in revenue while posting a profit of £15 million.

They figured that profit margins could be significantly boosted if they managed to cut out the middlemen (i.e., dealerships and traders).

The brothers were able to quickly grow the business using the millions in profits that the core Carcraft business was generating. By 2008, We Buy Any Car was already running national TV commercials.

A jingle released in April 2009 proved to be particularly popular with consumers, which significantly raised the firm’s awareness.

Also, due to the great financial depression, many people were forced to sell off their cars to make up for the loss of earnings.

As a result, We Buy Any Car would grow like gangbusters. By the end of 2009, the service had already purchased over 100,000 cars and opened its 100th branch.

And due to the rapid success of the car buying model, the brothers decided to expand by launching We Buy Any Van in 2010.

The firm’s aggressive haggling tactics would soon come back to hunt it, though. In April 2011, the British Office of Fair Trading (OFT) “found that 95.8 percent of customers who sold their car to webuyanycar.com received less for their vehicle than the original website valuation.”

While the firm believed that its aggressive negotiation tactics were still in accordance with the law, it still announced that it would make the necessary changes to avoid any trouble going forward.

The OFT investigation didn’t seem to affect We Buy Any Car’s growth too much, though. In October of the same year, it announced that it would expand into the United States, its second market, by opening 20 branches. We Buy Any Car invested £1 million to finance the launch.

Unfortunately, the bad news for We Buy Any Car seemed to continue as well. One of the firm’s agents, in an interview with The Mirror, had the following to say about its buying practices:

“The pressure on vehicle purchasers to lie to ­customers is immense ­because earnings are based on commission. The whole business is based on ­persuading the ­customer into thinking their car is worth a lot less than it ­actually is. The customer loses out while the company makes massive profits.”

The purchasers would be instructed to search for the tiniest of issues, for instance by pointing out minor ‘damages’ including tiny stone chips and slightly worn tires. He would go on to add that “the sad part is that some customers are ­desperate because they’ve lost their jobs. That kind of vulnerability is music to the firm’s ears because it knows they will take whatever they are ­offered.”

The firm’s profile, despite those damming practices, remained unaffected, though. And the McKee brothers, years after trying to sell Carcraft, finally pulled off the exit they so desperately sought.

In May 2013, vehicle auction company BCA, short for British Car Auctions, acquired We Buy Any Car for an undisclosed sum. We Buy Any Car had already purchased over 425,000 cars from consumers at that point.

Meanwhile, BCA was acquired by private equity Haversham Holdings in March 2015. The deal, which valued the We Buy Any Car Owner at £1.2 billion, would inject new capital to pay down portions of its debt and allow We Buy Any Car to expand into new countries, namely Germany and the Netherlands. BCA would also be rebranded into BCA Marketplace as a result of the said acquisition.

One of those profit-boosting initiatives was the introduction of a service called premier payment, which for a fee of £29.75 allowed them to have funds deposited within 30 minutes.

By January 2017, a little after ten years of launching, We Buy Any Car reached the inaugural milestone of one million purchased cars.

We Buy Any Car would continue to invest in expanding its business, mostly running various national TV adverts (such as with television presenter Philip Schofield) and opening up new branches across the country.

Problems would continue to accompany the firm as well. In September 2021, We Buy Any Car, alongside Saga and Sports Direct, were fined a total of £495,000 (£200k for We Buy Any Car) for sending hundreds of millions of nuisance messages to consumers.

Three months later, in December, it had to publicly apologize to a female customer after one of the firm’s representatives repeatedly sent inappropriate messages without her consent.

Today, a total of 700 people are employed by We Buy Any Car, which operates over 500 branches in the United States and the United Kingdom. It has helped over 2.5 million customers sell their cars.

How Does We Buy Any Car Make Money?

We Buy Any Car primarily makes money by selling the vehicles it purchases for a higher price than they were initially bought for.

In that regard, it operates just like any other car dealership. However, there are a few competitive moats that enable the company to achieve comparatively higher margins.

The first key differentiator is convenience and simplicity. All you need to do to get an initial valuation is to enter the car’s registration number and mileage.

Moreover, a We Buy Any Car facility is, on average, only 13 minutes away while the money, should you agree to sell, is transferred into your bank account within 30 minutes.

A certain set of customers may value speed over getting the absolute best price on their vehicle. Another key aspect, which has only been amplified by the rise of the internet, is the fact more and more people are simply not comfortable with haggling and negotiating.

And when selling a car online, for instance via Auto Trader or Gumtree, one has to deal with dozens or hundreds of messages. Buyers may or may not be serious and some, even though a price was previously agreed upon, may try to negotiate again when meeting in person.

However, as I’ve pointed out before, consumers pay for this convenience by getting a worse price on their vehicles. Studies have shown that car owners lose out on £958 on average when selling their vehicle via We Buy Any Car.

Interestingly, getting a worse deal in exchange for convenience and speed isn’t necessarily limited to the automotive industry. In recent times, more so in the United States, so-called iBuyers (such as Opendoor) have emerged, promising to purchase someone’s home within days or sometimes hours – and then flipping them for a profit.

The second competitive advantage that it possesses has to do with Constellation Automotive Group, the company that owns We Buy Any Car.

Cinch, which was initially launched as a classifieds site but later rebranded into an online car dealer, currently sells over 8,000 cars via its website. A majority of those vehicles are likely sourced from the vehicles that We Buy Any Car purchases.

As a result, Constellation is able to utilize the traffic that its popular offline (Marshall) and online (BCA, Cinch) brands generate and, after proper inspections, offload said vehicles considerably faster.

And for those vehicles that it cannot sell via those brands, it can simply sell them to competing auction houses, dealerships, and car supermarkets.

The business model of We Buy Any Car is thus predicated on speed (both in terms of acquiring new vehicles and offloading the ones it holds) as well as maximizing the number of cars in its inventory.