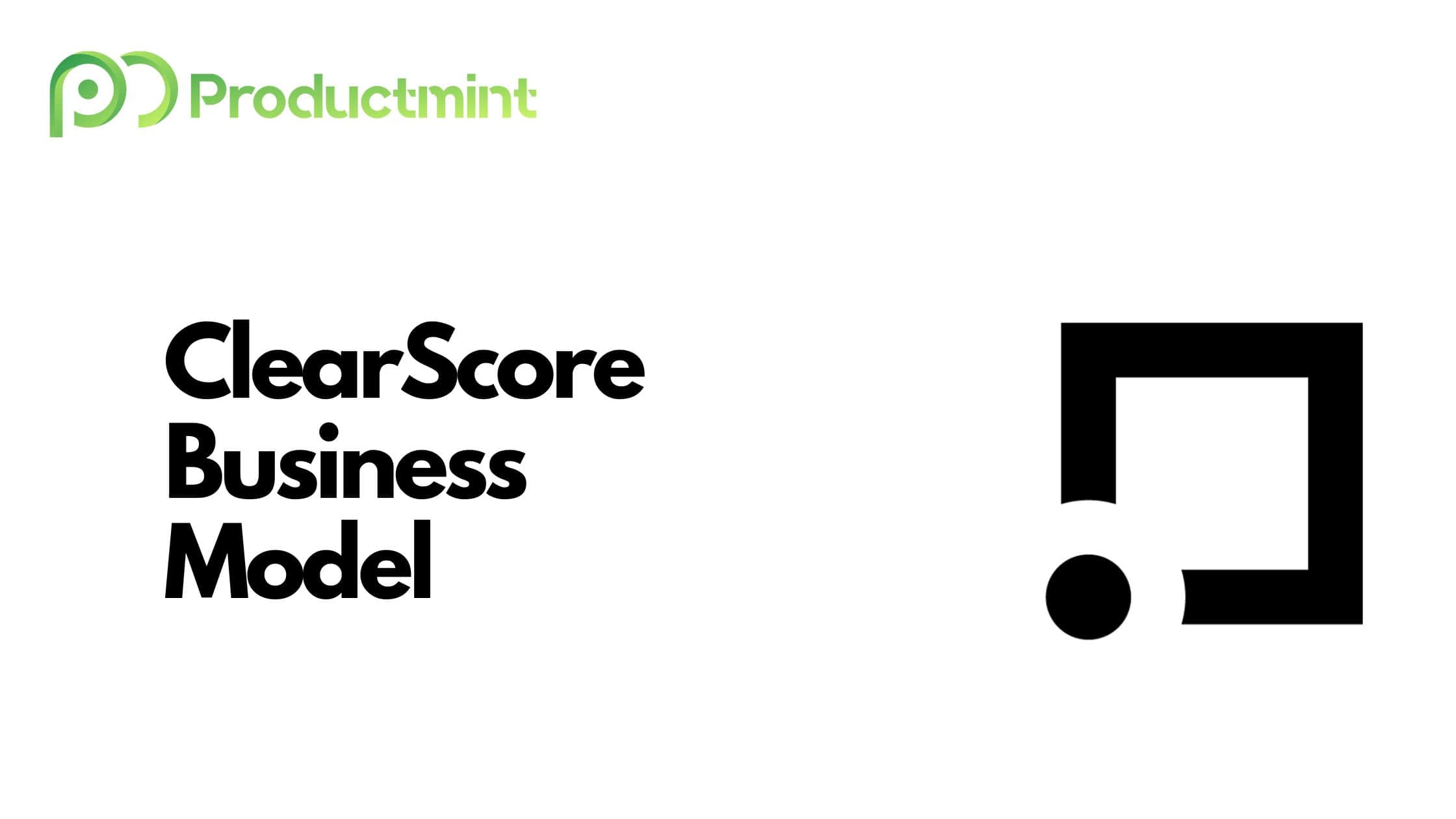 ClearScore is a FinTech company that allows customers to check and improve their personal credit scores free of charge.

ClearScore makes money by collecting commissions from its product recommendations and by charging subscription fees for premium features.

Founded in 2014, the company has risen to become one of UK’s leading credit scoring services. ClearScore is currently valued at $700 million.

ClearScore is a FinTech company that allows customers to check and improve their personal credit scores free of charge.

Customers can get a dedicated credit report simply by signing up. Afterward, that report is being sent on a monthly basis. Users, whenever something changes, will receive notifications.

A dedicated timeline then allows users to check their credit score development for the past six years. Moreover, ClearScore tracks your finances and consistently assesses what affects them.

Customers are, furthermore, presented with a variety of offerings that fit their financial situation. These include credit cards, loans, mortgages, insurances, and more.

ClearScore is regulated by the Financial Conduct Authority and strictly complies with the 2018 Data Protection Act. Additionally, it consistently scans the dark web to check if a user’s data has been compromised and is being used for malicious purposes.

The credit score data that ClearScore provides is sourced from licensed credit reference agencies, namely Equifax and Experian, and depends on the country of operation. ClearScore is available in Australia, the U.K., and South Africa.

ClearScore can be accessed by visiting the firm’s website or by downloading its mobile app (available for Android and iOS devices).

ClearScore, which is headquartered in London, U.K., was founded in 2014 by Justin Basini and Dan Cobley.

Basini, prior to starting the company, had garnered over a decade of experience as both an entrepreneur and leader in the business space. He had been in marketing and worked for companies such as Procter & Gamble, Deutsche Bank, and Capital One, amongst others.

In 2010, he started data protection company ALLOW, which ultimately didn’t pan out. The business folded in 2013 and prompted Basini to join Zapp Mobile Payments.

But just after a year, entrepreneurship kept calling once again. In order to get it off the ground, he recruited Cobley who had spent the previous nine years at Google where he rose to become the managing director for the U.K. market.

At the time, the market for checking one’s credit score was dominated by incumbents such as Experian who charged consumers for those very same reports. Over 15 million people in the U.K. had thus never accessed their credit score data.

The inspiration for launching ClearScore likely originated from overseas where Credit Karma, which had been launched back in 2007, was making some serious waves disrupting that industry.

Basini and Cobley raised a first undisclosed seed round from Blenheim Chalcot back in June 2015, which allowed them to get the business off the ground. Raising capital was a necessary evil because ClearScore had to pay Experian rival Equifax to get access to that data.

After over a year of working on the business, the two finally unveiled ClearScore to the public in December 2015.

Half a year later, in June 2016, they scored an undisclosed Series A round from QED Investors (led by Nigel Morris, co-founder of Capital One) as well as Lead Edge Capital. That month, the company announced that it had managed to sign on over two million customers already.

Other startups would soon take notice as well. Companies like Freescore and Noddle launched just months after ClearScore to take advantage of that same opportunity. ClearScore’s success even prompted competitor Experian to make its credit scores available for free.

Over the coming months, ClearScore continued to amass various accolades, such as winning the award for venture-funded business of the year (December 2016), joining the Future Fifty growth program (February 2017), or being named one of the UK’s 50 fastest growing FinTech companies (August 2017).

In March 2018, Experian announced that it agreed to acquire ClearScore for £275 million, ultimately combining the number one and two credit scoring services in the United Kingdom. Weeks later, ClearScore expanded into South Africa, its first foreign market.

By July, ClearScore had already reached seven million users across the globe. It, furthermore, launched in India, a market with more than 300 million people that could potentially benefit from its services.

Unfortunately, not everything was always going according to plan. During the summer of 2018, the Competition & Markets Authority (CMA) launched a probe into the acquisition over fears of creating unfair market conditions.

To make matters worse, U.S.-based powerhouse Credit Karma acquired competitor Noddle in November to enter the U.K. as well. Finally, in February 2019, both Experian and ClearScore decided to call off the deal because the CMA wouldn’t approve it due to “satisfactory terms.”

Instead, ClearScore now had its sight set on becoming the number one credit monitoring service in the U.K. and abroad. By July, it crossed the inaugural mark of 10 million users. 1.5 million of those could be attributed to its two foreign markets.

However, some of these markets would not last forever. Due to financial constraints, which were a direct result of the coronavirus pandemic, ClearScore was forced to close its India operations in April 2020. Moreover, it had to lay off 20 employees.

While India was closed, a new opportunity would soon present itself. A month later, in May, ClearScore entered Australia. It, furthermore, introduced ClearScore Protect, which enables users to monitor whether their personal information has been used for malicious purposes.

Throughout the rest of 2020, ClearScore managed to ink a few more partnerships, such as with Netacea to protect its users against credential stuffing attacks and account takeovers. To cap the year off, ClearScore announced that it would become a sponsor of football club Fulham FC and appear on the team’s left sleeve.

Over the course of 2021, ClearScore simply doubled down on what already worked, namely singing additional partnerships and introducing more features. Its growth was rewarded with a $200 million investment from the US-based fund Invus Opportunities in June.

This enabled ClearScore to beef up its hiring and attract seasoned executives such as Grant Foley who became the firm’s newest CFO.

Today, ClearScore has over 14 million customers of which 11 are based in the United Kingdom. The company, furthermore, employs close to 500 people.

How Does ClearScore Make Money?

ClearScore makes money by collecting commissions from its product recommendations and by charging subscription fees for premium features.

Let’s take a closer look at each of those in the section below.

The overwhelming majority of the revenue that ClearScore generates comes from the referral fees it receives whenever it successfully recommends a product.

ClearScore, just like Credit Karma, allows users to compare prices and sign up for a variety of offerings such as credit cards, loans, car insurances, and more.

Given that ClearScore has information on a customer’s financial wellbeing, it can make more tailored recommendations that are then likelier to convert.

ClearScore is then compensated in a variety of ways. Most of the time, it will receive a flat or percentage-based commission whenever a customer signs up for the service it recommends.

Additionally, some partners might compensate ClearScore on a cost-per-click (CPC) basis, meaning it gets a small fee when a user simply clicks on the offering.

Advertisers are incentivized to work together with ClearScore because they can a) acquire reliable customers (i.e., the ones that are likely to pay back a loan or don’t have much debt) and b) tap into a customer pool that is simply interested in personal finance.

In April 2021, ClearScore introduced Protect Plus, an identity protection and fraud prevention service that helps users to stay safe while browsing the internet.

The service checks whether your passwords have been compromised and are sold on the dark web. While the free version scans that information every three months, the premium option does on a daily basis.

Customers pay a subscription fee to access the premium version, which either costs £4.99 a month or £49.99 per year.

Apart from more frequent scanning, users can also provide more emails to be checked while getting access to a dedicated live chat and scheduled phone call service, amongst other benefits.

ClearScore, according to Crunchbase, has raised a total of $200 million across four rounds of equity funding.

Global equity investor Invus Opportunities valued the company at an eye-popping $700 million when it invested into ClearScore in June 2021.

ClearScore is not obligated to disclose its shareholding structure with the public since it remains in private ownership.

It can, however, be assumed that Basini and Cobley retain a fairly large stake in the company that they started.

First of all, they only raised three equity-based financing rounds. What we know is that the company likely (if no secondary sale was involved) gave up around 28 percent ($200 million investment / $700 million valuation) to Invus Opportunities.

Second, ClearScore has been profitable for a while and thus only relied on two early funding rounds prior to and right after its launch.