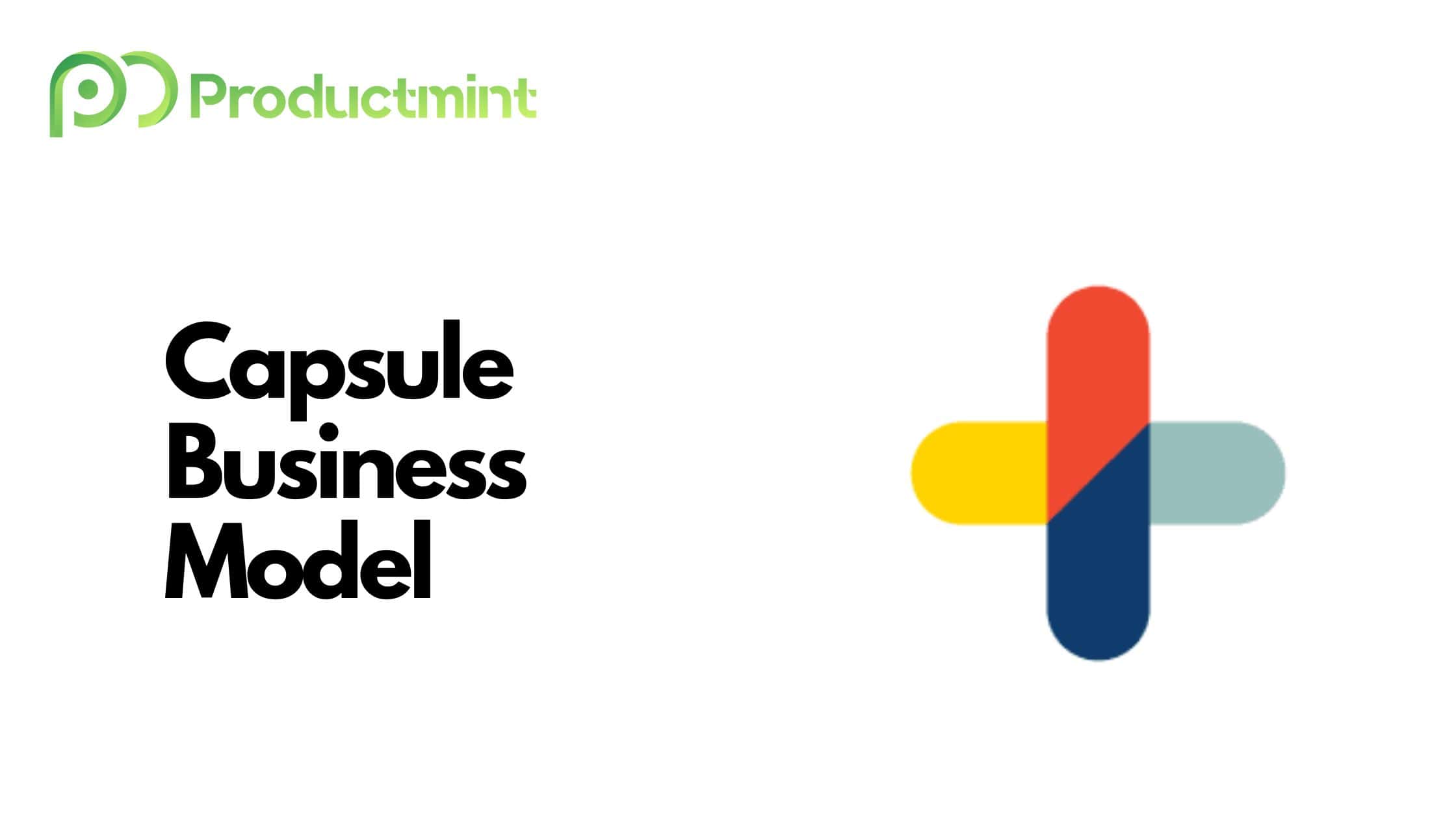 Capsule is an online pharmacy that delivers new prescriptions as well as refills right to the customer’s address.

Capsule Pharmacy makes money by selling prescription drugs. The customer (via co-pay) and the insurance provider both pay a portion of the drug’s sales price.

Launched in 2016, Capsule has grown to become one of the leading MedTech startups in the United States. It is currently valued at $1 billion.

Capsule is an online pharmacy that delivers new prescriptions as well as refills right to your doorstep.

Using the service is as simple as it gets. Capsule does not require its users to register. They can use the service right away by telling their doctors that their pharmacy of choice is Capsule.

Afterward, you simply add the necessary address and payment data (for your co-pay) and select a delivery day and time.

Capsule then takes care of the rest by delivering the medication to the selected address. Deliveries can be tracked right within the platform.

Users can, furthermore, communicate with their pharmacists directly on Capsule. The service even coordinates refills with your doctor and manages any outstanding communication with insurance providers.

Capsule works together with essentially any insurance provider across the United States including all commercial insurance plans, Managed Medicaid, and Medicare Part D.

The company also operates one physical store in New York City’s Chelsea neighborhood. Customers can, therefore, fill up their prescriptions in the store as well.

Capsule’s various services can be accessed by visiting its website or by downloading any of the platform’s mobile apps (available for Android and iOS devices).

A Short History Of Capsule

Capsule, which is headquartered in New York City, was launched in May 2016 by Eric Kinariwala. Founder Kinariwala certainly has the chops that made his startup fundable.

He completed his college degree as a University Scholar at the University of Pennsylvania’s Wharton School. Post-graduation, Kinariwala went on to work as an analyst in Bain’s investment division for two years.

He then spent another five at Perry Capital where he was part of the firm’s investment team as well. From 2013 to 2015, he continued his impressive career by getting an MBA from Stanford.

One day in January 2015, Kinariwala woke up with a huge headache. His doctor, after a quick phone call, told him that he has a sinus infection for which he needed to get medication.

So, he put on his winter jacket and went out into the New York winter. The moment he arrived at the pharmacy, his problems only worsened.

More than 60 people were waiting in line as well, forcing him to wait almost an hour. When he finally got to the counter, the sales assistant told him that the drug he needed was out of stock.

Given the fact that Kinariwala into dozens of businesses during his time in the investment world, he soon began to wonder whether pharmacies were operated efficiently or not.

What he soon discovered was an incredibly messy industry that, despite the widespread adoption of internet-based services, hadn’t changed for the past 100 years.

For example, he discovered that close to 50 percent of all prescriptions go unfilled due to a variety of circumstances. Furthermore, only around one percent of all medication sales were occurring online, in large part due to the pharmacies’ archaic systems.

For the next year, he began working on refining his idea and making an actual business out of it. To increase the credibility of the business, Kinariwala teamed up with Sonia Patel who became Capsule’s Chief Pharmacist.

In May 2016, a year after conceiving the idea, Capsule was finally unveiled to the public. The service was solely launched in New York City to ensure that medications can be delivered in time.

To get the business started, Kinariwala raised an undisclosed seed round from Thrive Capital. As opposed to other businesses, which consistently release new information to remain in the media and thus attract more customers, Capsule remained fairly silent.

The next time it was talked about was during the firm’s Series A round, which Capsule announced exactly a year after it launched (in May 2017). The startup raised an additional $20 million in that round.

And a little over a year later, in August 2018, Capsule’s team managed to raise another $50 million in Series B funding. However, Capsule remained solely focused on the New York City area, which itself is a $10 billion market.

Despite Capsule’s decision to remain in New York, the online pharmacy segment soon began to heat up. Competing startups like Alto or SingleCare were raising tens of millions in funding themselves. Others were acquired by larger organizations such as Amazon’s purchase of PillPack for $753 million in June 2018.

And even the established players began to shift their business models online. CSV, for example, introduced a medication delivery service during the summer of 2018.

To continue to be able to compete, Capsule raised another round in September 2019. This time, investors poured a whopping $200 million into the company, which had grown to over 60,000 customers in New York City.

Yet, the biggest boost to Capsule’s business was not the funding it raised, although it had been done at the perfect time. Months later, at the beginning of 2020, the coronavirus pandemic forced people to hunker down inside and led to the (temporary) closure of physical stores.

Capsule, operating almost exclusively online (except for its one store in Chelsea), was perfectly prepared to weather this storm. The company went on a hiring spree and employed over 400 new people in the span of weeks.

Additionally, it finally began to expand into new markets. In April, it launched in the Minneapolis area, its first market outside New York City. Over the coming months, it expanded into a handful of other areas/cities including New Jersey, Austin, Boston, Chicago, and more.

Capsule, furthermore, was able to score some impressive partnerships with other healthcare startups. Examples include Hims & Hers (June 2020) and Ginger (January 2021).

Throughout 2021, Capsule continued to double down on those favorable market conditions. To continue to fund its expansion efforts, it raised a $300 million round in April. Investors valued Capsule at $1 billion, which meant the company became a unicorn five years after being established.

Others continued to invest as well. GoodRx, for instance, went public in 2020 and used the cash to launch a national advertising campaign. Amazon, on the other hand, began to integrate PillPack into its core Prime service.

Capsule simply continued to plug away by entering new markets. It launched in Los Angeles, Denver, Delaware, and Houston, among a few other markets. In the meantime, competitor CVS announced in late 2021 that it would be closing 900 of its stores in the next three years to respond to increasing demands for online delivery.

Today, Capsule employs over 1,000 people across a variety of locations in the United States – and continues to disrupt the $425 billion pharmacy industry from the inside out.

How Does Capsule Make Money?

Capsule Pharmacy makes money by selling prescription drugs. The customer (via co-pay) and the insurance both chime in.

In that regard, Capsule’s business model is not much different compared to that of a traditional pharmacy operating via physical stores.

Those pharmacies normally purchase drugs either from wholesalers or via so-called Pharmacy Benefit Managers (PBM).

Prescriptions are normally sold for a gross margin of around 20 percent. Additionally, pharmacies generate revenue by cross-selling other types of products in the store including vitamins, snacks, magazines, and more.

Capsule turns that concept on its head by not relying on almost any physical retail location. It utilizes technology to allow both doctors and insurance companies to streamline the process.

For example, it has developed various APIs that enable insurance companies to directly pay for the drug without the need for human involvement.

Automating many of the processes that are normally done by humans (i.e., employees of the pharmacy) improves Capsule’s margins and allows it to reinvest its profits into delivery as well as an enhanced customer service.

Operating solely online also increases trust among consumers. They are more likely to ask a sensitive question online instead of consulting with someone they don’t know in person.

Additionally, since Capsule stores a customer’s health records, it can offer a better and more dedicated experience.

Lastly, the firm’s software enables doctors to establish refill preferences and determine alternative medications if a patient’s insurance provider does not cover his or her first choice.

Capsule, according to Crunchbase, has raised a total of $570 million across six rounds of venture capital funding.

Capsule Pharmacy is currently valued at $1 billion after raising $300 million in Series D funding back in April 2021.

Since Capsule remains in private ownership, it is not obligated to disclose revenue figures to the public. It may do so during a future round of funding or when it files to go public.

The founder of Capsule Pharmacy, Eric Kinariwala, as well as Thrive Capital likely possess the greatest ownership stake in the company.

As previously stated, Capsule remains in private ownership and, as such, is not required to reveal its ownership structure.

However, it can be assumed that the founder, who remains its CEO and actively engaged in its day-to-day business, will own a significant stake.

Thrive Capital, on the other side, has invested in Capsule during multiple rounds of funding. The VC led both the seed as well as Series A and B rounds of Capsule.

Backers are often able to capture the largest stake during a startup’s early rounds of funding since the investment is largely narrative-driven.

Thrive Capital, furthermore, participated in the firm’s Series C round. The only round it hasn’t been involved in was Capsule’s Series D.

The exact ownership breakdown of Capsule will be revealed if the company ever decides to go public.