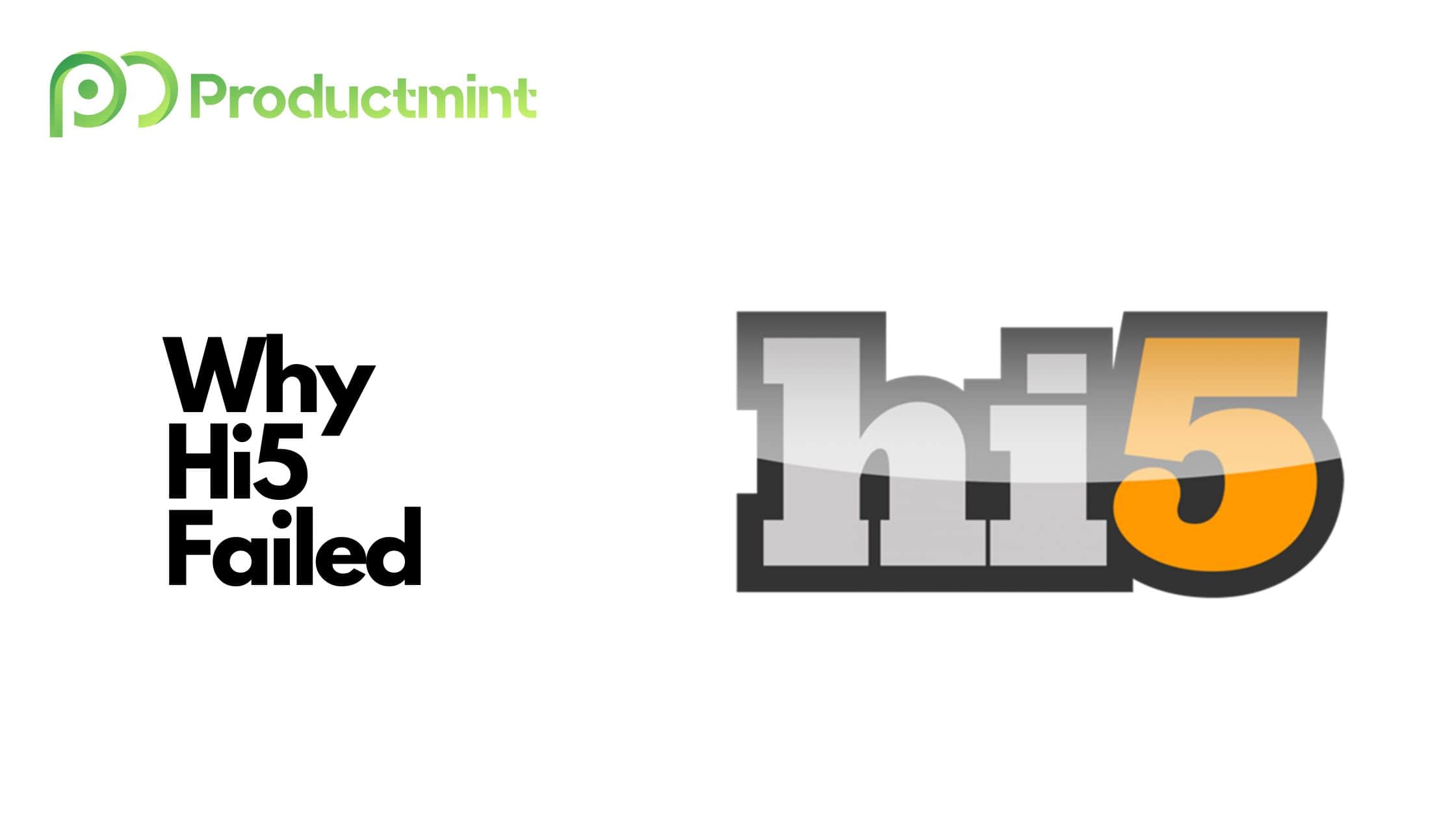 Hi5 is a social networking website on which users can set up profiles as well as connect with other members.

Hi5 failed because it couldn’t keep up with its competition. Facebook, in particular, was able to raise substantially more in funding, which enabled it to hire the world’s best engineers.

Hi5 is a social networking website on which users can set up profiles as well as connect with other members.

Then, you have the chance to customize said account by adding relevant information such as your gender, birthday, education, interests, and more. A profile picture rounds up the account.

Users can then interact with each other by liking and commenting on photos, posting on their profiles, or sharing interesting content.

Hi5 even had a dating feature that enabled you to send flirt requests or messages that had gifts attached to them.

And just like with any other modern-day social media platform, you can follow other members or add them as friends.

Hi5 eventually pivoted into social gaming and enabled people to play games within the platform. Some of its most popular titles included RockYou Pets and TopFriends.

Additionally, users could purchase digital tokens (using fiat currencies) which they could spend within those games or on digital gifts.

Hi5, after tens of millions in raised funding and multiple pivots, ultimately failed to capitalize on its popularity. How it came to be, who’s behind it, and what the platform is up to these days will all be covered in the coming chapters.

What Happened to Hi5? Detailing Its Rise and Fall

Both founders immigrated to the US when they were young and grew up in the country’s Midwest. Yalamanchi, who is four years older than Garg, remained in the region during his computer science studies at the University of Illinois Urbana-Champaign.

In the late 90s, he headed out west to San Francisco to work in the startup industry. One of his employers, e-mail community product eGroups, was acquired by Yahoo for $450 million in 2000.

Meanwhile, Akash Garg completed both his bachelor’s and master’s degrees at Stanford where he studied computer science as well.

He then joined Reactivity, which was later acquired by Cisco, as a software engineer working on enterprise products. A year into the business, Hi5 was already profitable

Around the turn of the century, social media networks were slowly beginning to take off. Friendster essentially pioneered the industry when it launched in 2002 but ultimately failed to capitalize on its early popularity.

However, it became instantly evident that the concept of social media was here to stay and become a core part of the participatory Web 2.0 era.

So, at the end of 2002, the two founders began working on socializing the web. Interestingly enough, Hi5 wasn’t their first endeavor, though.

They initially launched a dating site called Sona.com, which was aimed at users in Southeast Asia. To get the website developed, they raised a little bit of funding from their fathers while remaining nimble as a team.

Unfortunately, the dating experiment did not take off as the founders hoped, which ultimately led them to pivot to Hi5. In late 2003, the platform was officially unveiled to the public.

One thing that the founders maintained was their focus on international markets. Instead of battling it out in the United States and potentially being crushed by the likes of Myspace or Facebook, which both launched in 2004, they decided to immediately go abroad.

Hi5 quickly became the most popular social networking website in a variety of countries across Latin America, Europe, and Asia. The company itself became profitable within a year of launching, in large parts because it remained nimble and only employed around a dozen people.

Yet, in the mid-2000s Myspace remained firmly in the driver’s seat. In 2005, News Corp spent a whopping $580 million to acquire Myspace, which ultimately represented the beginning of its demise.

While Myspace and Facebook were leading the race towards social media dominance, Hi5 was certainly the biggest among what was then described as the second-tier networks (including Orkut, Bebo, Imeem, and many more).

By early 2007, Hi5 already boasted 50 million registered members – most of whom remained based outside the United States. Hi5 even had more traffic than Facebook and became one of the world’s ten most popular sites.

As a result, the founders, which largely remained in the background until that point, managed to raise $20 million in Series A funding in July 2007. And just a mere six months later, they raised another $15 million in debt funding.

Other things the founders splurged on included the introduction of a mobile site as well as integrations with various other platforms (such as Microsoft’s Instant Messenger). Unfortunately, things would soon take a turn for the worse.

At the time, Hi5 was deriving all of its revenue from banner ads. The great financial depression, which was in full swing by the latter half of 2008, led to an immense pullback in advertising spending.

Hi5 was subsequently forced to lay off around 15 percent of its staff (~ 20 out of 110 people) in October. To add fuel to the proverbial fire, user growth also began to stall.

The founders, therefore, decided to pivot away from a business that is solely reliant on advertising towards virtual goods, which it introduced in December. Furthermore, it became the first social network to introduce a virtual currency that users would use to purchase said goods.

The move was heavily inspired by China-based Tencent, which had built a successful business on the backbone of virtual gifts that users would exchange with each other.

Another playbook adoption was the launch of a dedicated games section. Part of why Facebook continued to grow exponentially was the introduction of social games like Farmville that allowed its developers (Zynga, in this case) to reach unicorn status.

Unfortunately, advertising still made up the majority of Hi5’s revenue. The continuous meltdown of the advertising industry required the founders to raise another $3 million in debt funding from existing backer Mohr Davidow Ventures in March 2009.

That same month, the firm also announced that it laid off 50 percent of its staff, most of whom were involved in selling ad space on the platform. Even CEO and founder Ramu Yalamanchi stepped down from his role and became Hi5’s Chief Product Officer. Bill Gossman, formerly the CEO of the online advertising service Audience Science, replaced him.

Over the coming months, Hi5’s deprecated team continued to experiment with a variety of features to reignite growth. In May, for example, it introduced an instant messaging service similar to Facebook’s chat function.

Furthermore, it teamed up with RealNetworks to sell downloadable games like GTA: IV or Gears of War as well as partnered with classifieds powerhouse OLX to display ads on user profiles. Unfortunately, none of these initiatives really moved the needle.

Consequently, Hi5’s executive team decided to undergo the largest pivot in the firm’s history. Instead of social interactions, the platform would begin to shift its focus toward social gaming. As part of the pivot, it introduced hi5 Stars, a virtual and customizable avatar.

Moreover, co-founder and CTO Akash Garg decided to depart from the company. Ironically, Garg joined competitor Bebo for a year and subsequently had stints at Twitter, Afterpay, and now MoonPay.

St. John’s first point of action was to oversee the acquisition of social gaming developer Big Six in February 2010. The goal of the acquisition was to develop exclusive titles for Hi5, which would in theory attract additional users.

In June 2010, Hi5 raised another $14 million in funding from Crosslink Capital to further support the push into social gaming. And much like Facebook, it also introduced a portal for game developers who would build applications for Hi5.

Unfortunately, all of those pivots and initiatives weren’t able to stop the inevitable. More and more users began to move over to Facebook as well as emerging mobile platforms like Instagram.

It wasn’t particularly surprising when, in September 2011, the firm announced that it would lay off the majority of its staff. While CTO St. John said that the layoffs were part of an organizational restructuring move, many in the industry knew that something else was going on.

And what was going on became evident just three months later. In December, social networking service Tagged announced that it acquired Hi5 for an undisclosed amount. Steve Sarner, Tagged’s VP of Sales and Marketing, said that hi5 would continue to operate as a separate site.

Eventually, in 2014, Tagged rebranded as an app incubator called If(we) and was ultimately sold off to MeetMe in 2017. Meanwhile, Hi5 simply continued to exist without much interference.

These days, you will be greeted with the above sign-up form when visiting the website. And while the landing page claims that over 100 million people are registered on the platform, only a very tiny fraction of them is active anymore.

Hi5 primarily failed because it couldn’t keep up with its competition, which was substantially better capitalized.

Facebook, for example, raised close to $2 billion in funding before it went public in May 2012. This, in turn, enabled the firm to weather the economic downturn and keep on investing into the core platform.

As a result, Facebook was able to scoop up the world’s best engineers, which are mission-critical for any type of internet business.

Facebook could simply afford to experiment with a variety of features until one stuck. The newsfeed, which it essentially popularized, became one of Facebook’s major growth engines.

Hi5 was always a follower when it came to rolling out new features. By the time it pivoted towards social gaming, Facebook was already raking in hundreds of millions in fees from game developers.

And once network effects started to kick in, Facebook essentially became unstoppable. All of your friends and family were using the platform, which made it almost impossible not to join it.

Meanwhile, activity levels on Hi5 and competing social media platforms like Bebo or Myspace soon began to diminish. Neither of them was able to stop inevitable.