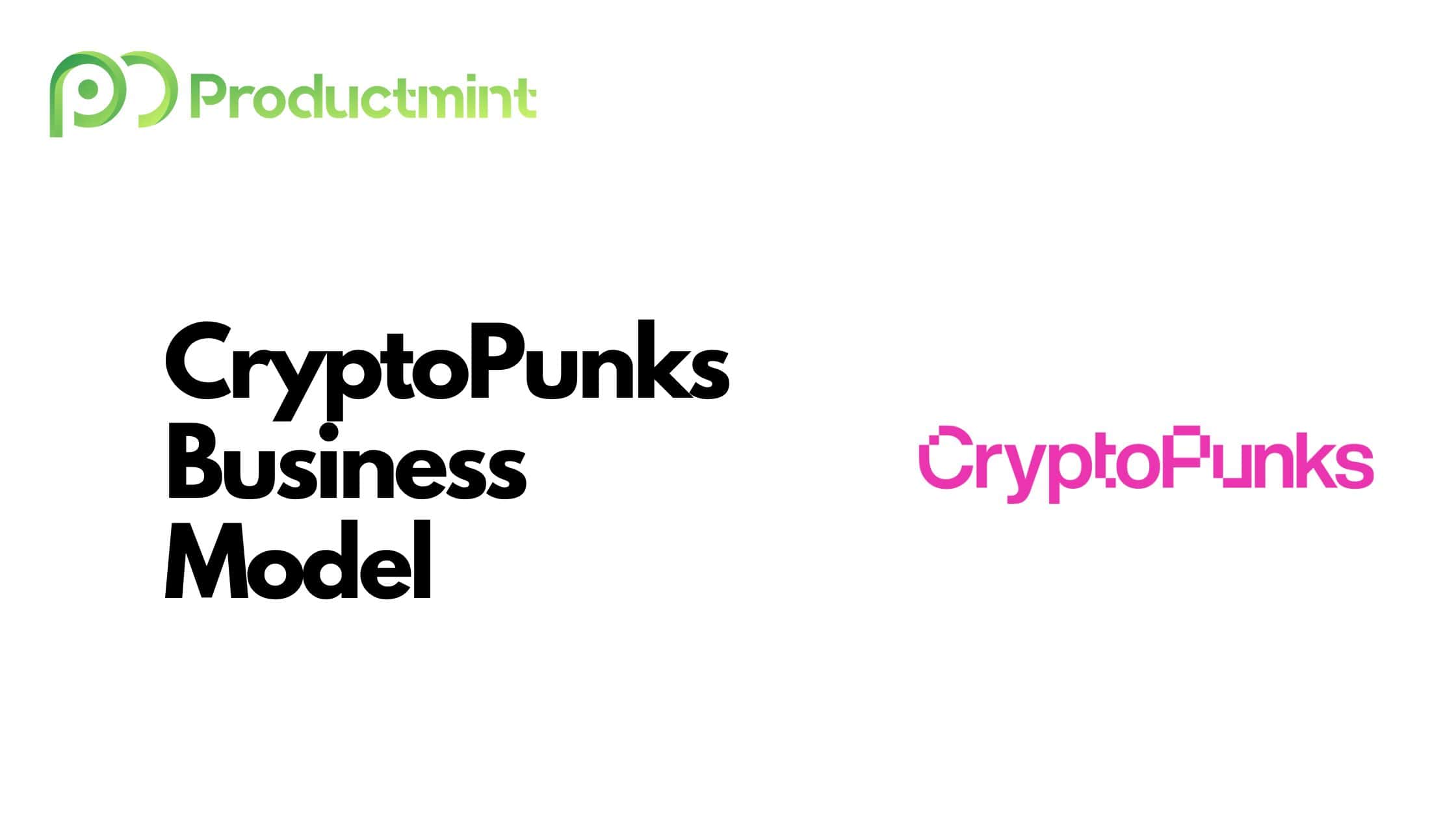 CryptoPunks are a limited collection of 10,000 non-fungible tokens programmed for the Ethereum blockchain.

CryptoPunks (or rather its creator Larva Labs) makes money by selling the NFTs they own. Larva Labs does currently not disclose how many CryptoPunk NFTs it possesses.

CryptoPunks are a limited collection of 10,000 non-fungible tokens (NFTs) on the Ethereum blockchain.

CryptoPunks are 24×24 pixel art images that possess a variety of different attributes such as hairstyles, glasses, or skin color. Some represent people while other punks are apes, aliens, or even zombies.

Each token is only minted once and thus unique in its characteristics. Consequently, that means if one holds a CryptoPunk NFT, he or she is considered the sole owner of that digital piece of art.

CryptoPunks also possess varying levels of rarity as exemplified by their characteristics. For example, there are only 24 ape CryptoPunks in existence.

The CryptoPunks project was initially created by Larva Labs, a mobile studio and consulting company based in Brooklyn.

CryptoPunks, which were created by Matt Hall and John Watkinson (owners of Larva Labs), were launched in June 2017.

Hall and Watkinson, who both grew up in the Ontario area, met each other during their computer science studies at the University of Toronto.

Although they became acquainted with each other during a class project, their friendship only materialized after graduating in 1998 due to their common love for programming.

After being frustrated with the job opportunities presented to them in Toronto, they, independent of each other, decided to move to New York City in 1999.

Realizing they had made similar plans, Hall and Watkinson eventually ended up sharing an apartment. During the day, they would both work various tech jobs while experimenting with side projects in the evening and during weekends.

Eventually, they figured it was time to branch out on their own. In 2005, they, therefore, founded Larva Labs, which would primarily churn out mobile-based applications.

One of those apps was Androidify, released in 2011, which they developed in partnership with Google. The app would allow users to customize the green Android avatar by altering its clothing, skin color, and accessories.

Not only did the app become an immediate hit but it would also inform many of the stylistic decisions that would shape CryptoPunks. Quick side note: Androidify was removed from Google’s Play Store in February 2020 after not having been updated the previous four years.

After a series of moderately successful and some failed projects, the duo felt it was time to try something else. Watkinson himself had been toying around with a side project that would randomly generate pixelated characters.

Around that same time, the first examples of blockchain-based art were entering the public consciousness. Joe Looney, a fellow developer, had made a name for himself by creating digital copies of the Pepe meme (dubbed Rare Pepe).

While Looney’s work became one of the first public showings of the power of NFT, its technological foundation was too complex for the average Joe to understand – and thus purchase. Instead, they soon settled on Ethereum, which had its own fully functional programming language. That language, named Solidty, allows programmers to not only transfer tokens (Ether, in this case) but also write code to store the ownership of a given digital asset.

After weeks of tinkering around, they finally launched the CryptoPunks project on June 10th, 2017. Unfortunately, in the first few days, interest was lackluster at best despite the fact that the punks were given away for free.

However, that suddenly changed when tech site Mashable published a lengthy piece about the NFTs and their creators. The article ended with an interesting quote that perfectly embodies the past and current state of the cryptocurrency industry:

“Someday, owning a CryptoPunk might signify just how early of an adopter you were into the world of Ethereum and its thriving digital art scene. Or, they could just be a bunch of images.”

Within 24 hours of the article being published, all of the remaining punks were sold. One buyer managed to scoop up 758 of them while Hall and Watkinson reserved 1,000 NFTs for themselves. Not long after, the duo set up a dedicated Discord channel for its owners.

Slowly but surely, interest in the punks began to increase. Within less than two years after the launch, CryptoPunks were beginning to trade for low four-figure amounts. Hall and Watkinson used their clout in the crypto community to release a second Ethereum-based project called Autoglyphs in April 2019.

The widening adoption of CryptoPunks, furthermore, coincided with the increasing interest in the NFT space. For reference, around $50 million worth of NFTs were being traded in 2019. That number quintupled to $250 million in 2020.

Driven by a widening adoption among Twitter users, CryptoPunks soon became synonymous with the NFT space and were widely acknowledged as one of its foundational projects. More and more influencers began using punks as their Twitter profile picture, which further increased interest.

This ushered a period of extreme hype during which tens of millions would be exchanged every day. The hype was further amplified by the $69,346,250 Christie’s sale of an NFT work by the artist Beeple.

Larva Labs, once again, took advantage of that hype by releasing a third project called Meebits. The founders made a whopping $80 million after the conclusion of the auction. At that point, all 10,000 released CryptoPunks managed to reach a combined valuation of almost $2 billion.

In the meantime, CryptoPunks continued to sell like hotcakes. In June, Larva Labs itself sold one of its CryptoPunks for an eye-popping $11,754,000 with the help of Sotheby’s. Not long after, celebrities like Jay Z or Odell Beckham Jr. began scooping up punks themselves and using them as profile pictures across their social handles.

However, its ever-increasing popularity also led to the emergence of copycat projects. Most notably, CryptoPhunk, a self-proclaimed parody collection that flips the original Punks images to face left instead of right, would garner the attention of buyers as well as Larva Labs.

The studio began to file DMCA takedown requests. Those copycat projects would resurface as soon as they would be taken down. The Phunks creators retaliated by publishing an open letter that criticized the unclear guidance Larva Labs gave when it comes to licensing the original CryptoPunks NFTs. Ironically enough, they even managed to sell that letter as an NFT for $20,000.

While NFT sales waned a little over the summer, demand for them would soon be back to previous levels. In late August, payments processor Visa announced the purchase of a CryptoPunk, which reignited the buying frenzy.

The hype allowed Larva Labs to sign a deal with the prestigious United Talent Agency (UTA) in early September, which would represent the studio in projects such as movies, TV shows, video games, and book publishing.

In late October, one CryptoPunk even sold for around $530 million. However, it was soon revealed that the sale was simply a publicity stunt by an unknown actor who utilized flash loan contracts. Demand for the punks remained so high that at certain points in time none of them were even being listed on marketplaces like OpenSea.

Due to their limited functionality and licensing woes, CryptoPunks were, for the first time, overtaken by Bored Ape Yacht Club (BAYC), another prominent NFT project. The founders got into even more trouble when, in early February 2022, they sold old V1 CryptoPunks NFTs from a scrapped smart contract.

Co-founder Hall was quick to apologize and said: “We made a mistake by interacting with this contract. We thought that by announcing our intentions and selling some of the tokens, we would signal our distaste for it, and maybe others would follow. That was a bad decision. We regret it, and we apologize to the community.”

Despite the blunder, demand for the punks remained undeterred. On February 12th, 2022, Deepak Thapliyal, CEO of cloud blockchain infrastructure firm Chain, purchased a CryptoPunk for nearly $24 million, making it by far the largest on-chain purchase in CryptoPunks history.

In March 2022, Larva Labs decided to abandon the project and sold it (as well as Meebits) to BAYC creator Yuga Labs for an undisclosed sum.

During the next few months, interest in NFTs as well as the cryptocurrency industry as a whole began to substantially decrease. The heightened interest rate environment as well as uncertainties of a looming recession led to sharp price declines, which certainly affected CryptoPunks as well.

Owners even sold their CryptoPunks NFTs at a heavy loss, which amounted to millions of dollars for some transactions.

How Does CryptoPunks Make Money?

CryptoPunks (or rather its creator Larva Labs) makes money by selling the NFTs they own. Larva Labs does currently not disclose how many CryptoPunk NFTs it possesses.

When it launched the CryptoPunks in June 2017, it basically handed them out for free since the founders wanted to test the concept of smart contracts.

However, the worldwide prominence of the CryptoPunks has given Larva Labs enough clout cover to be able to release additional projects.

One of those projects became Meebits, which the team launched in May 2021. The sale of all 20,000 Meebits netted Larva Labs a total of $80 million.

Larva Labs does not disclose whether CryptoPunks have royalty fees embedded into its smart contract. This would allow the studio to also participate in secondary sales.

Given that the CryptoPunks project nets tens of millions of dollars in secondary sales each month, participating in those would certainly provide Larva Labs with another very lucrative revenue stream.

For reference, the creators of Bored Ape Yacht Club, another extremely successful project, participate in secondary sales via a 2.5 percent royalty fee.

Talking about BAYC, the project also grants owners a variety of other benefits, such as access to concerts or exclusive merchandise, amongst others. Additionally, owners hold the copyright to their apes, which they can use to monetize them through media partnerships and alike.

Larva Labs has faced repeated criticism from the crypto community over its unwillingness to alter the project’s terms of service.

More specifically, owners can only use their punks commercially if they generate less than $100,000 a year and are not used on third-party products such as t-shirts or movies.

Yuga Labs, which has acquired the company behind CryptoPunks back in March 2022, hasn’t altered the project’s code yet.

The CryptoPunks project was created by Brooklyn-based Larva Labs. The CryptoPunks themselves are owned by a variety of different people and companies.

In fact, there are currently around 3,400 different owners that hold the rights to the 10,000 CryptoPunks in circulation.

Larva Labs itself has its own leader board in which it lists all of the NFT’s owners. The wallet 0xc352b534e8b987e036 is currently the largest holder with over 400 owned punks.

However, back in March 2022, Larva Labs’ founders decided to sell the company to Yuga Labs, the creators of the Bored Ape Yacht Club, for an undisclosed sum.