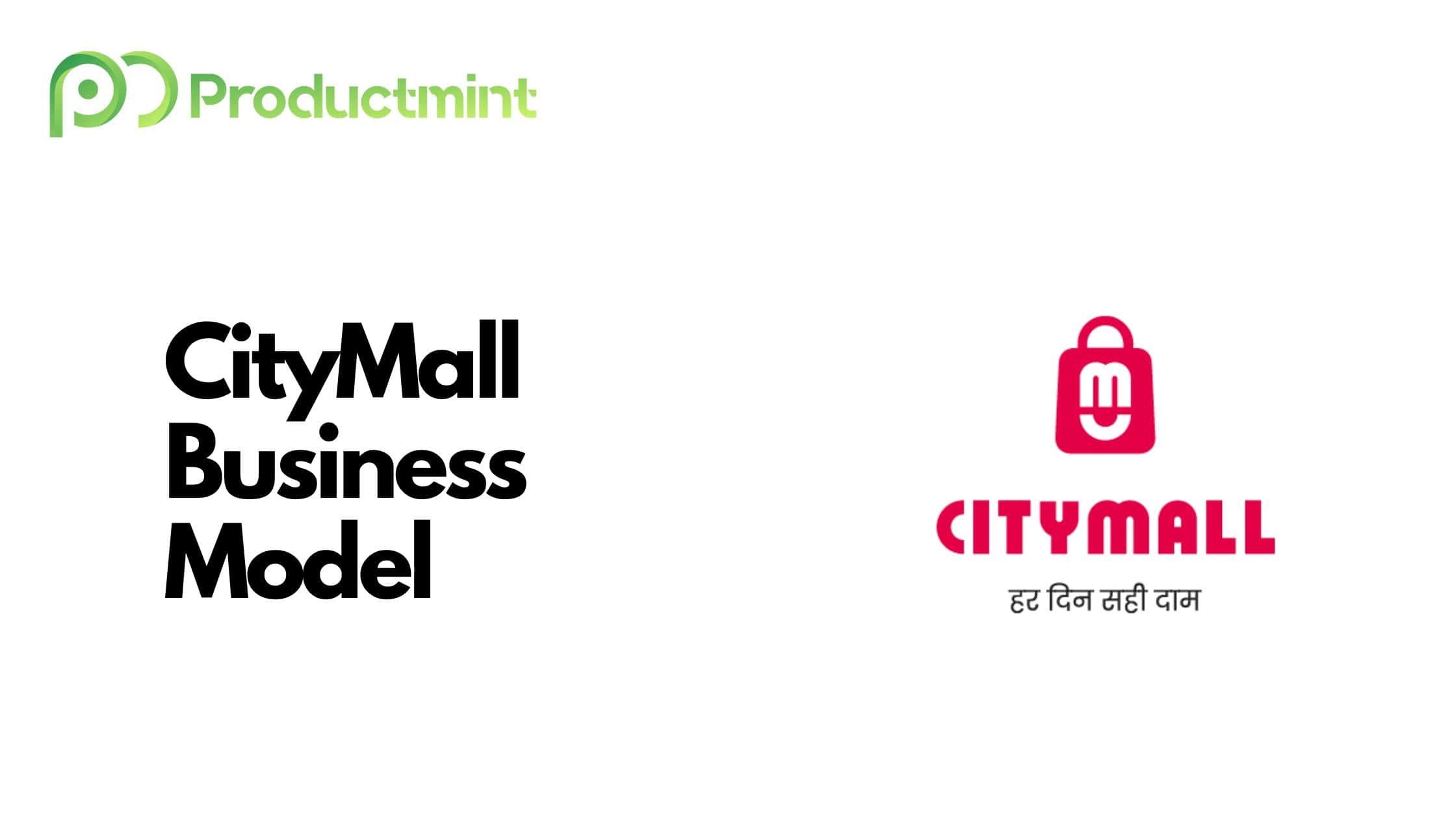 CityMall is a social commerce platform on which users can purchase everyday goods at discounted rates.

CityMall, much like a traditional grocery or fashion store, makes money from selling the goods on its platform at a profit. The firm operates under a marketplace business model.

Founded in 2019, CityMall has already become one of the biggest group buying platforms in India. Its founders have raised over $112 million in funding.

CityMall is a social commerce platform on which users can purchase everyday goods at discounted rates.

Customers can browse a selection of over 10,000 products including groceries, essentials, electronics, and fashion.

CityMall claims that the goods on the platform are 10 percent or so cheaper compared to a traditional (grocery) store.

Those discounted products are offered in partnership with so-called community leaders. These are locals who represent CityMall by promoting products and handling payments.

The community leaders can normally earn anywhere between Rs. 5000 to Rs 10,000 on a monthly basis – all without having to invest in costly inventory.

CityMall itself is mostly present in tier-II, tier-III, and tier-IV cities (populations between 100,000 and 1,000,000) across India. These consumers, due to the logistical challenges involved, have traditionally had a tough time getting orders shipped at sensible prices and lead times.

Customers can either order something on CityMall’s consumer-facing Android app or via WhatsApp (although selection on WhatsApp is limited).

Meanwhile, the community leaders themselves can use a separate Android app on which they can track sales, manage customer interactions, and collect payments, among many other things.

Payments are either settled in cash or via online means such as Paytm, Google Pay, debit and credit cards, as well as UPI.

Both founders have had their fair share of entrepreneurial experiences prior to launching CityMall. Kikla, for example, started B2B E-commerce marketplace HAWKR and sales platform BeatRoute.

The latter, to this date, continues to employ around 100 people. Verdhan, on the other hand, launched the software development agency Codalyze Technologies prior to CityMall.

For the longest time, China has been known as a world-class copycat of Western business models. This has changed in recent times, though.

Live streaming as well as group buying and social commerce have been two consumer trends that were largely created in China. The most prominent adoption of said models is Pinduoduo, which went public on the Nasdaq stock exchange back in 2018.

Pinduoduo’s success has ironically caused various copycats across the globe to emerge. In India, platforms such as Meesho, DealShare, Gobillion, and Otipy have all raised tens or hundreds of millions of dollars to bring social commerce to India’s rural customers.

And India certainly shares many of the same characteristics that make it a viable group buying and social commerce market. The number of internet users in the country is expected to grow to over 900 million people by 2025.

The majority of those users will come from rural areas (i.e., tier II to IV cities and small towns). Traditionally, those users have had a tougher time ordering from platforms such as Flipkart due to the logistical challenges involved.

Another factor is that rural Indian citizens tend to have a much greater sense of community. Their shopping decisions are thus influenced by family and friends.

Kikla and Verdhan took advantage of this notion by working together with community leaders who take care of product assortment since they know their municipality best.

In an interview with TechCircle, co-founder Kikla doubled down on why they decided to go with the community leader model. “Peer to peer referral brings in the strongest layer of trust when it comes to making a positive decision,” he said.

They officially incorporated CityMall back in July 2019, which they launched months later in October. Around the same time, the founders managed to raise a first seed funding round of $300,000 from a variety of angel investors.

A further $300,000 in debt was raised in early December. By the summer of 2020, amplified by nationwide Covid lockdowns, CityMall had already grown to over 250 employees.

Elevation Capital (previously SAIF Partners) alongside other investors poured another $3 million into the business back in November 2020. Throughout 2020, CityMall was able to grow its revenue by 12x.

And the founders continued to raise money on the backbone of that growth story. World-renowned investor Accel and existing backers poured $11 million into CityMall during its Series A round in March 2021.

They used the funding to not only expand the number of cities but also categories. Previously, CityMall featured everyday items such as spices. However, the founders realized that the platform could be utilized to sell all kinds of products including T-shirts, cookers, electrical appliances, and so forth.

A mere three months later, in June, CityMall raised $22.5 million as part of its Series B led by the same investors. 20,000 resellers were onboarded onto CityMall at that point. In the meantime, those community leaders were serving over 200,000 customers.

The extensive fundraising was somewhat necessary to keep up with the competition. DealShare, for example, had just announced a $144 million fundraise themselves. Established commerce players such as Swiggy were also rumored to launch group buying platforms of their own.

However, not everything was always going according to plan for CityMall. Throughout 2021, the firm tried to enter the grocery space but ultimately fell short due to supply chain issues.

Luckily, money tends to be able to sort those things out. In March 2022, the founders raised another $75 million in funding (Series C). CityMall was valued at $350 million during that round.

The funding, furthermore, would enable CityMall to expand from 25 cities to over 60 locations by the end of 2023. Unfortunately, those plans came to a screeching halt just months later.

Rising worldwide inflation led many countries across the globe to raise interest rates, which in turn caused venture funding to dry up and consumer sentiment to heavily diminish.

As a result, demand on CityMall substantially diminished, which prompted the firm to lay off around 15 percent of its workforce. Ironically, CityMall had stated during its Series C fundraise that it planned to hire an additional 400 people – plans it abandoned not long after.

The Business Model of CityMall

CityMall, much like a traditional grocery or fashion store, makes money from selling the goods on its platform at a profit.

CityMall essentially operates under the marketplace business model, meaning it matches both suppliers (= community leaders) and buyers on one proprietary platform.

One of the key issues that a marketplace normally entails is the lack of trust between buyers and sellers. For instance, counterfeit products on platforms such as eBay have been plaguing it for decades.

CityMall tries to solve this issue by installing community leaders as intermediaries. Those community leaders, in turn, are incentivized to behave properly because they receive a cut from the sales they facilitate.

Customers then not only benefit from increased levels of trust but above-average discounts due to the group buying mechanism.

Since a community leader can urge customers into purchasing a certain product, he or she is often able to close multiple sales of the same product.

Purchasing the products in bulk ultimately makes shipment less expensive. Those savings are then passed onto the consumer.

As of now, CityMall continues to invest most of its funding and revenue into expanding its supply chain. Reaching economies of scale will likely allow the firm to not only serve more customers but drive down the cost of each purchase.

With scale comes the opportunity to further monetize its platform. The previously-mentioned Pinduoduo, for example, derives most of its income from ads displayed within the platform.

India, which is projected to reach 900 million internet users by 2025, can certainly offer enough eyeballs to make displaying ads worth the seller’s while.

Another key aspect of CityMall’s platform is to maintain high engagement. The firm tries to engage users via features such as a horoscope, which prompts them to return on a daily basis.

Greater engagement ultimately leads to more app usage, which in turn increases the likelihood of making a sale.

CityMall, according to Crunchbase, has raised a total of $112.2 million across 6 rounds of venture funding.

CityMall is currently valued at $350 million after having raised $75 million in Series C funding back in March 2022.