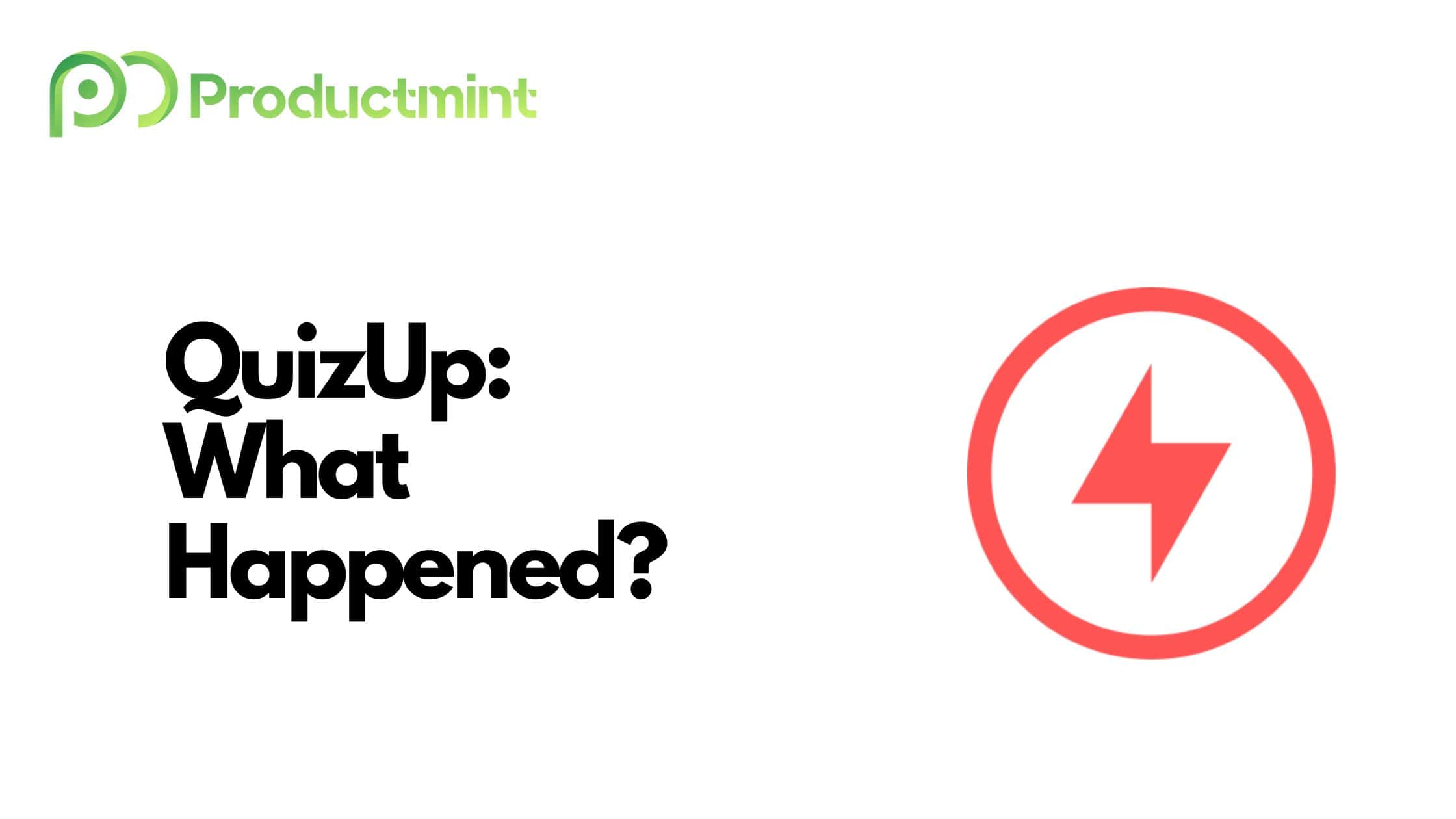 QuizUp is a social trivia game that requires players to compete against each other by answering random questions.

QuizUp is discontinued because the developers behind the game were unable to properly monetize the game.

QuizUp is a social trivia game that requires players to compete against each other by answering random questions.

Players are presented with over 250,000 questions from around 1,000 categories, including sports, TV, music, and many more.

Playing QuizUp is as simple as it gets. First, users need to download the app, which was available for Android, iOS, and Windows Phone devices.

You will then be presented with hundreds of playable categories. After selecting one, players will be matched with other competitors from across the globe.

Every game includes six normal rounds and one bonus round that would mark the end of the match. Players have ten seconds to answer a question by picking one of the four options presented.

If both players pick the correct answer, then the one who did it in a faster manner will receive more points (a maximum of 20 points that can be earned per round). While incorrect answers yielded zero points, giving the right one in the bonus round could lead to up to 40 points.

Apart from the core game, QuizUp also had a forum in which users are able to discuss various topics. They, furthermore, can text each other via private messages.

QuizUp, despite amassing tens of millions of dedicated players, was discontinued in 2021. How it came to be, who is behind it, and what ultimately led to its demise will be covered in the next few chapters.

What Happened To QuizUp?

QuizUp was released by Reykjavik, Iceland-based Plain Vanilla Games in 2013. Plain Vanilla itself was founded three years prior by Thor Fridriksson.

Fridriksson, prior to starting the company, had spent a decade in various marketing-related roles for brands such as Vodafone.

After wrapping up his Oxford MBA in 2009, he decided to embark on the trail of entrepreneurship just a year later.

In November 2011, after almost a year of development, Plain Vanilla released The Moogies, a game aimed at 2–6-year-old children.

Right after launching, the game was featured on Apple’s Spotlight section, which severely boosted its download numbers.

Unfortunately, this proved to be a very unstable method of acquiring users. A few months after the launch, Apple removed the game from the promoted section, which caused usage to plummet.

By the spring of 2012, Plain Vanilla’s runway shrank to a few months only. Fridriksson, being the scrappy entrepreneur that he is, had to get creative.

He, therefore, decided to fly out to Silicon Valley in a last-ditch effort to raise cash. Luckily, his persistence eventually paid off.

In July, Plain Vanilla raised a $1.2 million seed round from a dozen angel investors, including Tuesday Capital or Cap-Meridian Ventures. Now, it was time to get to work.

During that time period, many newly launched mobile games were simple adoptions of existing board game titles. Examples included Scrabble, which became Words With Friends, or Pictionary, known as Draw Something in the mobile app space.

However, attempts at translating games such as Trivial Pursuits were lackluster at best. Fridriksson and the team, therefore, decided to give that exact concept a go.

Others would soon take notice, though. Not long after it shifted its strategic focus, Plain Vanilla was approached by film studio Lionsgate. Together, they developed a trivia game based on the studio’s Twilight movies.

That game was released in November 2012 and propelled Plain Vanilla into never-seen-before heights. The added attention enabled Plain Vanilla to raise another $2.4 million in April, which gave them even more time to work on QuizUp.

On November 7th, 2013, after more than a year of working on the game, Plain Vanilla finally unveiled QuizUp to the public. The game was initially released for iPhones only.

One of the key draws, apart from the game’s unique match-making design, was the fact that QuizUp supported over 100,000 questions and 300 categories right from the start.

Within two weeks, the game had amassed over 1.5 million users. This allowed the team to be able to raise another $2 million in funding (an extension from its Series A round back in April).

Unfortunately, not everything was always going according to plan. On November 25th, software developer and CEO of Dragon Forged Software (a competitor to QuizUp, btw.) Kyle Richter released a lengthy blog post detailing how QuizUp is sharing a user’s information without their consent.

For example, the game was storing a user’s personal data after one gives it access to their address book, meaning all your contacts would live on QuizUp’s servers for as long as the company pleased.

CEO Fridriksson issued a public apology and promised to fix the problem, which Plain Vanilla did just a few days later. The company’s model citizen behavior was rewarded with yet another funding round. In December, Plain Vanilla raised $22 million in Series B funding.

By mid-January 2014, QuizUp’s userbase had grown to more than 7 million members. To take advantage of the hype and further increase adoption, successive apps for the iPad (February) and Android (March) were released.

Those additional product launches allowed Plain Vanilla to almost double the member count for QuizUp to 13 million people by the end of March.

By the summer of 2014, more than 20 million people had registered accounts. To get it out into even more hands, QuizUp’s team released alternate versions for French-, German-, Portuguese-, and Spanish-speaking people.

Additionally, its community was able to add questions and categories themselves. By the end of 2014, QuizUp boasted 220,000 questions and around 700 topics. Competing apps, such as Trivia Crack, would soon emerge and act as legitimate competitors to QuizUp’s throne.

For QuizUp, expansion remained the name of the game. In April 2015, it unveiled a China-based version in cooperation with Tencent dubbed WeQuiz.

QuizUp, to keep members engaged, underwent a severe pivot in May. It introduced various social features such as the ability to check user profiles, follow others, and text them directly. A month later, Plain Vanilla released a dedicated version of the game for the Windows Phone.

Interestingly, the social features not only led to greater engagement but somewhat unforeseen outcomes. In France, for example, people would go on dates after getting to know each other in the game.

However, the revenue that Plain Vanilla derived from the game was still minuscule. Up until August 2015, the only way it made money was through packages that players could purchase (for example to get additional attempts).

That month, Plain Vanilla introduced a corporate version of the game dubbed QuizUp at Work. At the time, QuizUp boasted 70 million registered members. A few weeks later, another web-based version of QuizUp was unveiled, allowing players to create their own games by using custom questions.

Fridriksson, to further capitalize on the game’s popularity, managed to close a deal with NBC Television. The media conglomerate ordered 10 episodes for what would be released as a TV show based on the game.

Unfortunately, the lack of monetization would soon come to haunt Plain Vanilla. To extend its runway once again, Plain Vanilla raised $7.5 million from mobile games company Glu Mobile. The deal also included a 15-month option to acquire Plain Vanilla at a pre-determined price.

Over the coming months, public interest in the game continued to diminish. It, therefore, came as little surprise when, in August 2016, Plain Vanilla announced that it would be shutting down the company and laying off all of its employees (36 at the time). The closure was a direct result of the cancelation of its NBC show, which was announced just a few weeks prior.

That same month, Plain Vanilla halted support for the Windows Phone version of its game. Despite those issues, Glu Mobile went through with its acquisition in December. More precisely, it managed to acquire the rights to QuizUp, which it continued to run over the coming years.

However, Glu essentially ran the game in maintenance mode without unveiling any new and significant updates.

Regardless, it was still a shock when, in January 2021, Glu Mobile suddenly announced that it would be shutting QuizUp down. The game was removed just days later on January 20, 2021, and consequently shut down on March 22nd, 2021.

Founder Fridriksson, in the meantime, tried his luck at another trivia game. In 2018, he co-founded Teatime Games, raised millions in funding, and released a new game called Trivia Royale in June 2020. Unfortunately, just a year later, Teatime Games went bankrupt and was forced to shut down Trivia Royale.

Why Was QuizUp Shut Down?

QuizUp is discontinued because the developers behind the game were unable to properly monetize the game.

As a result, the cost of maintaining the game likely outstripped the revenue that its owner was able to derive.

Glu Mobile tried various methods throughout the years to make the game profitable, for example by introducing new challenges and rewards.

Unfortunately, QuizUp remained incredibly hard to monetize since mobile gamers are often not willing to churn out money for the games they play.

Hit game FarmVille is one of the best examples. A single-digit percentage of players made up the overwhelming majority of revenue.

Plain Vanilla, as well as Glu Mobile, ultimately failed to establish mechanisms that would incentivize players to pour their own money into the game.

Furthermore, Glu Mobile was acquired by Electronic Arts a month after shuttering the game. Glu Mobile, in all likeliness, needed to improve its balance sheet and maximize profits, which is a common practice to boost one’s acquisition price.